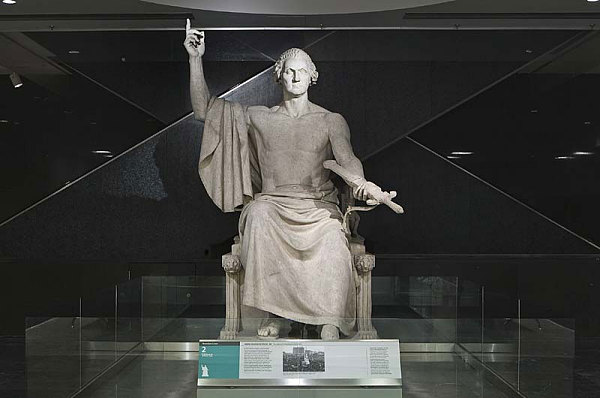 Large, iconic artifacts in the main corridor of each wing highlight the wing's key exhibition themes:

Ralph Baer’s Inventor’s Workshop (1st Floor, West Wing)
Visitors can view the home workshop of Ralph Baer, known as the inventor of the home video game. A monitor adjacent to the workshop will show an excerpt from an original color video tape of the “Brown Box,” the first video gaming system.

John Bull Locomotive (1st Floor, East Wing)
The steam locomotive John Bull was built in 1831 and ran for 35 years, pulling trains of passengers and cargo between the two largest cities of the time, Philadelphia and New York. The locomotive propelled trains at 25 to 30 miles per hour.

George Washington Sculpture (2nd Floor, West Wing)
On view is the marble statue of George Washington commissioned by Congress in 1832 to commemorate the centennial of our first president's birth. The artist, Horatio Greenough, modeled his figure of Washington on a classical Greek statue of Zeus, but the semi-clothed statue attracted controversy and criticism as soon as it arrived in the city in 1841. In 1908, Congress transferred the statue to the Smithsonian, where it went on view in the Castle. Then in 1964, it was moved to the museum for its opening.

General John J. Pershing's Desk (3rd Floor, East Wing)
On display until January 2019, the desk from General John J. Pershing’s war room, together with a full-size reproduction of the wall map on which he tracked troop movements, form the new landmark display for the Museum’s third floor east. The map shows troop locations on the western front the very day armistice was reached. Under Pershing’s command, two million American soldiers helped break the stalemate in Europe and win the war for the Allies.