Jefferson's Bible: The Life and Morals of Jesus of Nazareth 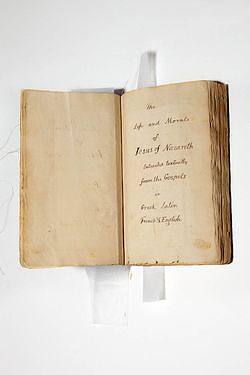 In 1820, Thomas Jefferson assembled a private text using excerpts from the Four Gospels of the New Testament in Greek, Latin, French, and English. His aim was to tell a chronological version of Jesus’ life, distilling his moral teachings and excluding those aspects which appeared to him “contrary to reason.” On view is Jefferson’s The Life and Morals of Jesus of Nazareth, which was recently conserved, together with two English editions of the New Testament that Jefferson used to clip passages and a copy of the 1904 U.S. Government Printing Office edition of the book. Visitors can explore each page of the bible at a special web kiosk and view short videos about the bible’s history and conservation.

Related book: The Jefferson Bible, Smithsonian Edition: The Life and Morals of Jesus of Nazareth by Thomas Jefferson