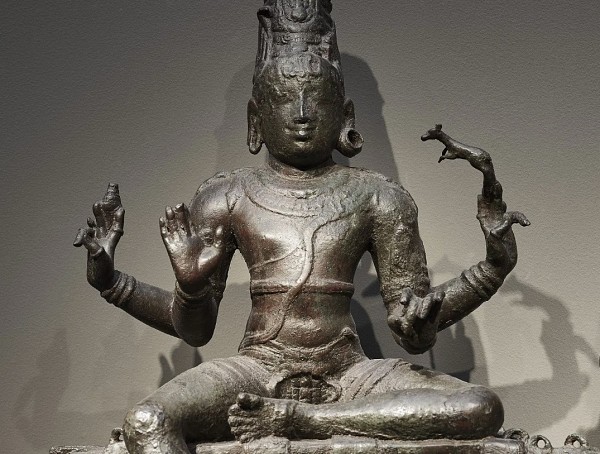 Hinduism is a living religion with complex roots reaching back more than four thousand years. Its three major deities—the gods Shiva and Vishnu and the goddess with multiple names—each take on many forms. While the religion’s pluralism puzzles some, Hindus suggest that the infinite can be viewed as a diamond with innumerable facets. Acknowledging the power of an individual facet does not deny the validity of other deities, rituals, or beliefs.

In many Hindu traditions, images of deities are a central focus of worship. Devotion can be expressed through commissioning, adorning, or singing to a god embodied in an image, or by donating the image itself to a temple. Images of divine companions, such as the eagle Garuda, represent ideal devotees and are themselves recipients of worship.

All gods stand or sit on lotus blossoms, a symbol of purity. Because ornament is auspicious, deities are always well adorned with jewelry. Attributes, such as the god Ganesha’s sweets or Shiva’s third eye, reveal individual personalities and powers.