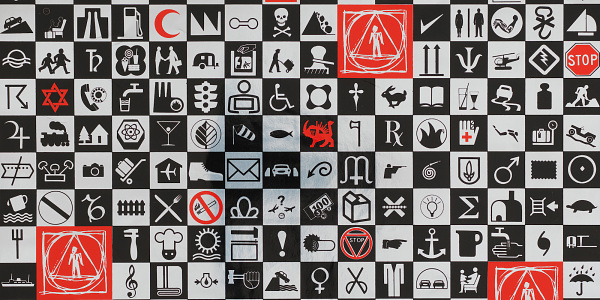 Give Me a Sign examines the fascinating histories behind many of the symbols that instruct, protect, entertain, empower and connect people. Marking the 50th anniversary of the Symbol Sourcebook, this exhibition draws from the archive of the book’s author and designer, Henry Dreyfuss, uniquely housed at Cooper Hewitt. As one of the United States’ leading industrial designers, Dreyfuss (1904–1972) promoted the power of symbols to facilitate quick and efficient global communication.

The exhibition charts the history behind symbols, such as the raised, clenched fist and its use in movements including the Black Lives Matter movement and more, the evolution of Olympic symbols to represent new sports and reach an international audience and the progression of the Accessible Icon from its creation in 1968 to the grassroots effort to update its appearance and reach from 2009 to 2011.

Another section of the exhibition highlights how people use emoji to communicate who they are and what they believe in. The process for designing and submitting emoji to the Unicode Consortium—the global regulator that maintains standards across digital devices—is told through the story of the “person with headscarf” and “inter-skin tone couple” emoji, which are held in Cooper Hewitt’s permanent collection.

In the collaborative spirit of the Symbol Sourcebook, which Dreyfuss intended to expand with the creation of new symbols, visitors are invited to design symbols and participate in creative activities in-gallery and online to co-create a Symbol Sourcebook of 2023.