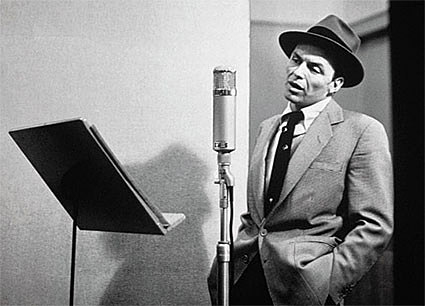 The National Museum of American History marks the centennial of one of the giants of the entertainment world, Frank Sinatra (1915-98), with a small display focused on his popular music, jazz, and motion picture career. This display showcases Sinatra’s contributions to America’s songbook and film history through photographic portraits by Herman Leonard and archival photos from Director George Sidney’ s collection, sheet music, album covers, and posters. The key artifacts illustrating Sinatra’s career include the trench coat worn by him in the 1957 movie Pal Joey and bow ties made by his first wife, Nancy, to throw to fans at concerts. A boom microphone of the type used by Sinatra helps visitors understand how he combined the “crooner” techniques of the band singer with the improvisational approach of the jazz musician, to produce a unique sound which took him to the top of the charts and inspired and informed generations of singers.