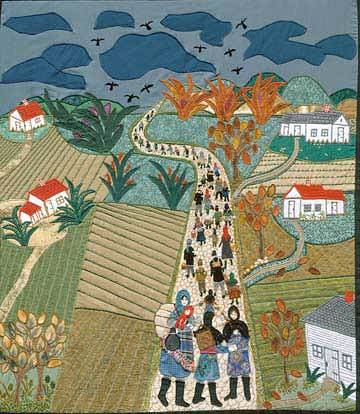 Esther Nisenthal Krinitz, along with her sister Mania, were the only members of their family, and among the few Jews in their village, to survive the Holocaust. Nearly 40 years later, Esther's haunting memories led her to create extraordinary works of art using the techniques of embroidery, fabric applique, and stitched narrative captioning. More than 30 of these remarkable panels, with vivid colors and striking detail, reveal a young girl’s struggle to survive in Nazi-occupied Poland and her ultimate escape to freedom in America. Trained as a dressmaker but with no training in art, Esther picked up a needle and thread, intending simply to show her children all that she had gone through. Yet the art she created—both beautiful and shocking—is universal in its appeal, expressing deep love of family and personal courage in the face of terror and loss. Presented in cooperation with Art and Remembrance, a non-profit arts and educational organization founded by Esther’s daughters.