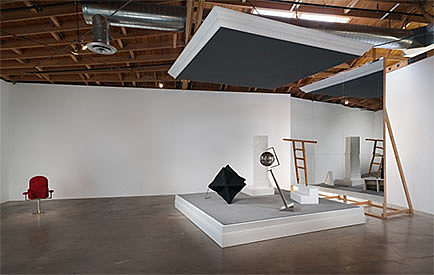 New sculptural work by contemporary American artist Shana Lutker based on historic fistfights involving surrealist artists. Lutker explores the avant-garde milieu of Paris in the 1920s, a place and time in which radical artistic ideas occasionally met with physical violence and artists sometimes attacked one another to defend ideologies and honor. Employing strategies developed by the surrealists, she has made objects, such as a plush red-leather-and-chrome theater seat or a crinkled lead curtain, that refer to things either depicted in her research materials or encountered on her visits to the sites of the fights. She stages the sculptures in arrangements that underscore their roles as either props or symbolic actors in a performance.

Lutker’s sculptural installations are organized in chapters corresponding to those in a forthcoming book, Le “NEW” Monocle, which takes up the physical confrontations involving founding surrealist André Breton, founding dadaist Tristan Tzara, Max Ernst, Joan Miró and other artists, performers and writers. The exhibition includes three booklets containing the essays that form the first three chapters: “The Bearded Gas,” “Protestation!” and “Again Against, A Back, A Foot, A Wall.” Lutker is also presenting new “table-chairs” upon which she displays related objects and research images, as well as a selection of sculptures from the Hirshhorn’s collection.