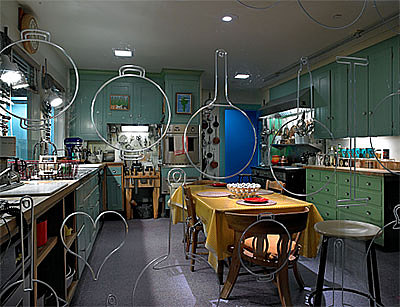 On view is Julia Child's 14' x 20' kitchen—custom-made by her husband—which has been reassembled here exactly as it was in her Cambridge, Massachusetts home. The kitchen, which Child (1912-2004) used as the set of three television shows and as the testing ground for many recipes featured in her cookbooks, is composed of more that 1,200 individual pieces, including everything from her stainless-steel kitchen sink, to her six-burner Garland commercial range, to her personal cookbooks. The kitchen represents Julia Child's extraordinary influence on the way Americans think about their food and its history. When Child moved back to her home state of California in 2001, she donated her kitchen to the museum.