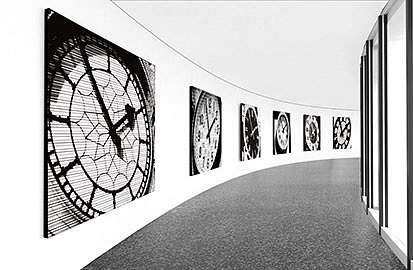 German-Iranian artist Bettina Pousttchi (b. Mainz, Germany, 1971) has often contemplated systems of time and space. Over the course of the last seven years, she traveled around the globe creating World Time Clock, a serial work that consists of twenty-four photographs taken in twenty-four different time zones, in cities as far-flung as Bangkok, Auckland, Mexico City, and Tashkent. At each location, the artist created a portrait of a public clock at the same local time: five minutes before two. Displayed together, these images suggest both a sense of suspended time and, in the artist’s words, “imaginary synchronism.”

Installed for the first time as a complete set, Pousttchi’s images will take the viewer along a circular path that recalls the artist’s circumnavigation of the globe, or the motion of a clock’s hands around its face. The hollow cylinder form of the building itself furthermore acts as a natural timepiece, literally framing the sun’s passage across the sky. The progressive shift in sunlight and shadow through the gallery over the course of the day provides a fascinating counterpoint to the mechanized and politically regulated version of time suggested by World Time Clock.