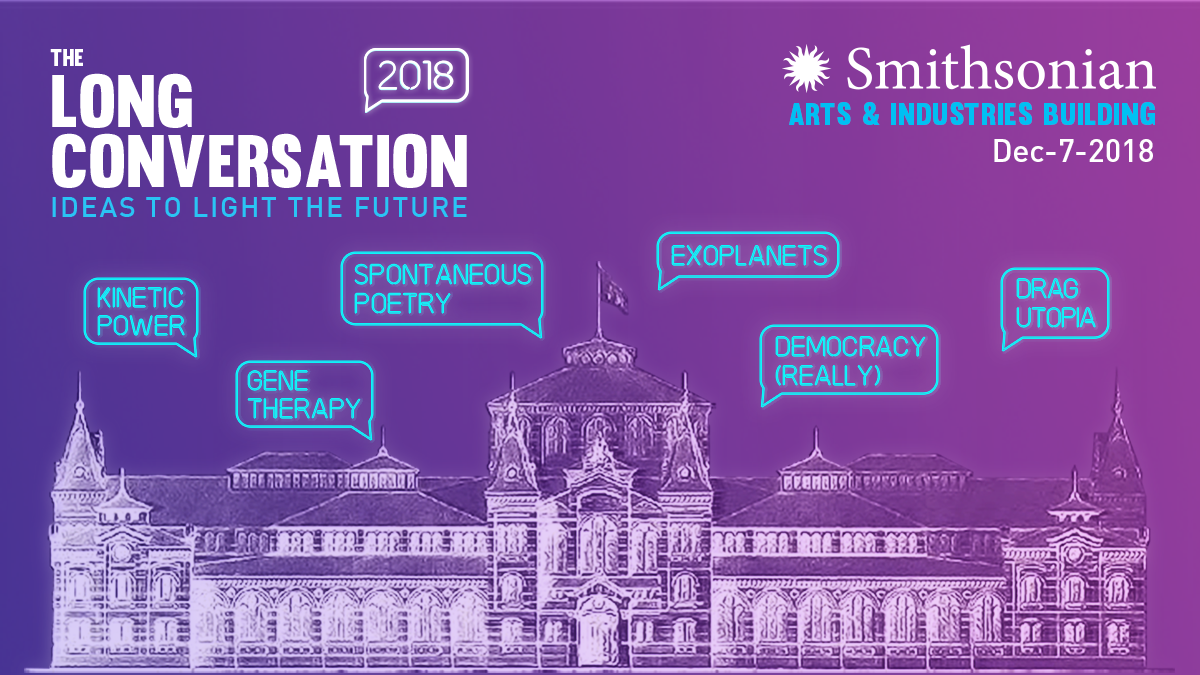 Tune in 2–10 p.m. EST to watch the livestream.
Free tickets for 2018's Long Conversation are SOLD OUT.

What do award-winning actor Alfre Woodard, The New York Times' David Brooks, drag queen Sasha Velour, NASA's head of the mission to Jupiter, and one of the world's leading cancer surgeons have in common? They all know something that makes them hopeful for the future. Come find out what at this one-of-a-kind event in one of the most beautiful buildings on the National Mall.

The Long Conversation is an epic creative marathon between artists, scientists and other big thinkers that's guaranteed to leave you feeling better about the future. Once a year, NASA astronauts, Grammy-winning musicians, tech CEOs, poets, inventors and more converge in the historic Arts & Industries Building for a lively 8-hour relay race of surprising conversations around the best ideas on the horizon. No moderators. No slides. All chemistry.

Sound crazy? It is—also uplifting, surprising, and a ton of fun

A magical setting: Come for the inspiration, stay for the surprise performances, art installs from Julia Buntaine Hoel, Phaan Howng, McCormack and Figg, and Gabriel Mellan, and the rare chance to explore the soaring halls of the Arts & Industries Building, America's first national museum.

Free and open to all: Tickets are free, but seating is limited to preserve the intimate atmosphere. See FAQs for more info.

Please note that this schedule is subject to change. No really—this outline is tentative and could totally change. All of our speakers are incredible and we are confident that you’ll enjoy whichever session you register for.

Obi Felten
Head of Getting Moonshots Ready for Contact with the Real World, X the Moonshot Factory
Technologist. Entrepreneur. Angel investor in women founders. Yogini. Biker. Beekeeper's wife. Mama of 2. Grew up in Berlin and saw the wall come down.

David Skorton
Secretary, Smithsonian Institution
Leader of the Smithsonian. Lover of arts and humanities. Supporter of the sciences. Advocate for education. Diffuser of knowledge. Board-certified cardiologist. Jazz flutist. Former U of Iowa and Cornell University President.

Mercedes Lopez-Morales
Astrophysicist at the Harvard-Smithsonian Center for Astrophysics
Searching for the next Earth. Astrophysicist. Lecturer. Researcher. Spanish-American. Convinced we are not alone.

David Rubenstein
Co-Founder and Chief Executive Officer, The Carlyle Group
Philanthropist. History buff. Leader of one of the world's largest private equity firms. Chair of the Smithsonian Institution Board of Regents.

Roy Wood Jr.
Comedian
Southerner. Correspondent on Emmy-nominated "The Daily Show with Trevor Noah." Host of Comedy Central’s “This is Not Happening” and the forthcoming "No One Loves You." Proud Florida A&M grad. Ex-Jedi.

Nick Pyenson
Paleontologist, Smithsonian National Museum of Natural History
Expert whale chaser, living and ancient. Author of "Spying on Whales." UC Berkeley Ph.D. Favorite fossil is the one yet to be discovered.

Niagara, Phaan Howng
Using large-scale landscape paintings, sculptures, and installations, Baltimore-based Phaan Howng cinematically stages the beauty of a post-human earth in order to initiate dialogues about the current crises of world ecology. Phaan will be adding swaths of color to AIB with her newest installation Niagara. The work will feature a vibrant focus painting, as well as three free-standing sculptures that represent the naturescape of a far future earth.  (Visit website, follow @phaanlove)

Optical Optimism, Gabriel Mellan
Focusing his art making on interactive sculpture and installations involving sound, motion, light and technology, Mellan’s work is fueled by material process and minimalistic forms.
With “Optimist Wall,” he invites you to refrain from taking things at surface value by revealing what is universal and inside us all. (Visit website, follow @gabrielmellan)

Zero dot Zero dot Zero, McCormack and Figg
Jenn Figg and Matthew McCormack began collaborating in 2009, after recognizing mutual interests in energy, technology and the environment. They use a variety of materials including glass, textiles, metal, sound, video, and electronics to investigate the connections between ecology, industry, science and identity.
McCormack & Figg will be illuminating this year’s central stage with a massive site-specific kinetic light sculpture, bringing a new energy for the future to the 140-year old space. (Visit website, follow @dr.jennfigg)

Wave(s), Julia Buntaine Hoel
Julia Buntaine Hoel is a conceptual artist, director of SciArt Center, and editor in chief of SciArt Magazine. She also teaches, consults, curates, and frequently writes about the intersection between art and science, and is currently the Innovator-in-Residence at Rutgers University. With her 3D brainwave sculptures, Hoel's artwork serves as a fascinating physical representation of the ideas in the room. (Visit website, follow @JuliaBuntaine)

Are you a member of the media hoping to cover the event? Email AIBpress@si.edu.

How do I get tickets?

Free tickets will be released online Monday, Nov. 5. Entry times will be staggered by 2-hour sessions throughout the day to keep the event's intimate feel.

A note about seating: Seats are first-come, first served. (Get there early to get the cushiest bean bags!) At the beginning of each session, we'll release any open seats to the waitlist - late arrivals might not be guaranteed a seat but can always watch the simulcast from the lounge or standing room. In between each session, the hall will clear, and will refill for the next round.

Do I have to arrive early, or stay the whole time?

Please arrive at least 15 minutes before your scheduled entry time to get checked in, grab a drink, and experience some magical moments before you sit down. We recommend staying for at least a full 2-hour session; many people stay longer, and return to watch later sessions.

What should I bring?

Your e-ticket or printed ticket, excitement, an appetite, favorite friends, a date. Consider leaving valuables or larger bags at home; we'll have coat racks but no lockers or secured coat check.

The SW Neighborhood Shuttle runs every 10 minutes, dropping off within a few blocks.

Bike racks are located near the Smithsonian Castle, on the north side of the Arts & Industries Building. Several Capital Bikeshare racks are nearby.

Street parking is metered and limited.

The Arts & Industries Building is proudly ADA compliant, and welcomes visitors of all abilities with accessible entrances and restrooms.

To request complimentary ASL interpretation, please email AIBinfo@si.edu two weeks in advance. The conversations will also be live-captioned and projected.

For everyone's safety, all visitors must pass through a speedy security bag check. And you know better than to try to bring in any of these items, right?

- Outside food and drinks

- Suitcases larger than a carry-on bag

- Pets (other than support animals)

- Dragons, all breeds (just checking you were paying attention)