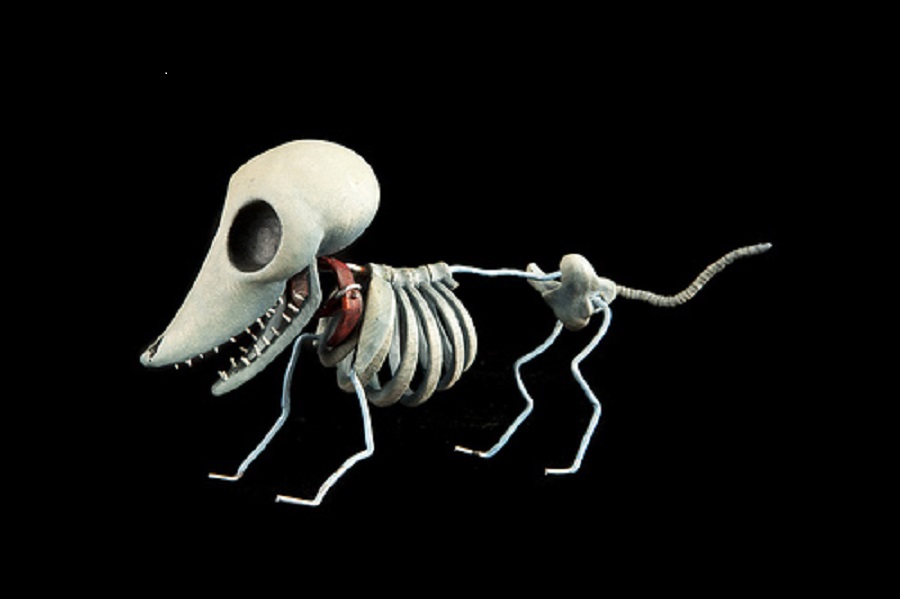 This skeletal pup wearing a red-leather collar is "Scraps," one of the 300 puppets created for 30 characters in the 2005 stop-motion animated film Corpse Bride, directed by Tim Burton and Mike Johnson.

The macabre story is based on a 19th-century Russian fairy tale. The production of the film required three groups of artists, including the storyboard (drawing) department, the animator fabrication workshop and the camera crew that filmed the movie.

Twenty-three animators worked on the film to create the marvelous puppets made of metal, silicone, foam and fabric at the cost of as much as $30,000 per puppet.

Tiny, intricate mechanical paddles and gears were attached at the ball joints and inside the dog’s head and adjusted with Allen wrenches. The eyes are made of urethane, and each side of the head is operated independently, including the eyebrows and lips. This groundbreaking technology enabled the animators to achieve a greater range of movement and reduced the need to make replacement heads for each change in facial expression.

In addition to the advancement in animation that contributed to the realism of the figures, the movie was photographed digitally and allowed for more flexible and tighter shots thereby adding more depth to the characters.

Scraps is in the collection of the Smithsonian’s National Museum of American History. The puppet is not currently on display.