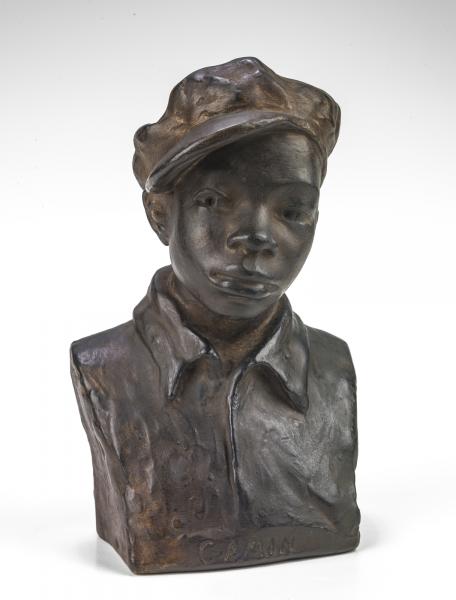 This sculpture, “Gamin,” was created by Augusta Savage (1892–1962) early in her career. It was based on her nephew, Ellis Ford. The French word gamin means ​“street urchin,” and the figure’s wrinkled shirt and cap emphasize his impoverished appearance. The child’s expression suggests a life of hardship and wisdom beyond his years.

Savage’s career was fostered by the climate of the Harlem Renaissance in New York City. She was a sculptor, influential teacher, and community art program director. In 1934, she became the first African American member of the National Association of Women Painters and Sculptors. Dedicated to expanding educational and professional opportunities for African American artists, she founded the Savage Studio of Arts and Crafts in Harlem, which was later developed into the Works Progress Administration’s Harlem Community Art Center, where she was its first director.

Savage believed that teaching others was far more important than creating art herself and explained her motivation in an interview: ​“If I can inspire one of these youngsters to develop the talent I know they possess, then my monument will be in their work. No one could ask for more than that.”