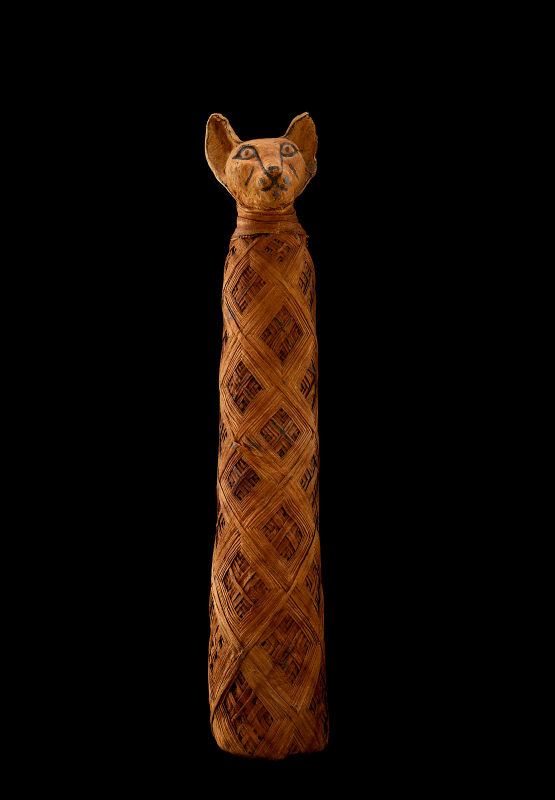 A mummified cat, circa 332–30 B.C. Photo courtesy of the Smithsonian’s Natural History Museum.

Cats played an important role in ancient Egyptian culture—from domesticated animals, which were kept to ward off mice and snakes, to symbolic representations of powerful Egyptian kings and gods. Egyptians bred and sacrificed cats to the gods, often mummifying and burying them in elaborate coffins.

One such coffin will be displayed in the exhibition “Divine Felines: Cats of Ancient Egypt” opening at the Smithsonian’s Arthur M. Sackler Gallery Oct. 14. This mummy from the National Museum of Natural History exemplifies this important ritual of ancient Egypt: the cat was tightly wrapped in linen and its features painted in black ink. Such mummies were offered to temples as signs of gratitude to the deities.

This mummified cat is one of 80 objects in the exhibition, which highlights the many roles cats played in ancient Egyptian culture. One of the reasons for the popularity of cats, like other animals in ancient Egypt, was their dual nature, a central theme of the exhibition. On one hand, they are docile, protective and nurturing, and on the other hand, they can be fierce, ferocious and aggressive. These qualities, together with cats’ loyalty and independence, became associated with Egyptian rulers and gods.

The exhibition, organized by the Brooklyn Museum, also dedicates a small section to cats’ canine counterparts.

“Divine Felines” opens as a part of the Smithsonian’s Freer Gallery of Art and Arthur M. Sackler Gallery reopening-weekend celebration Oct. 14–15 along with three additional exhibitions, “Encountering the Buddha: Art and Practice Across Asia,” “Re-sound: Bells of Ancient China” and Subodh Gupta’s “Terminal.” For more information on the reopening-weekend festivities and events, visit asia.si.edu/reopening.