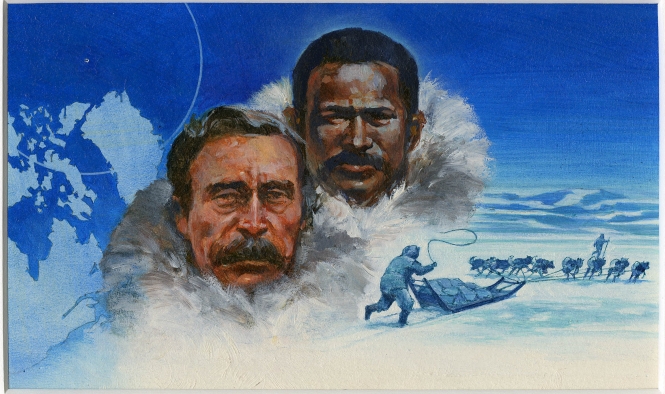 This artwork adorns a postage stamp of Admiral Robert E. Peary and Matthew Henson that was issued May 28, 1986. A former sharecropper from Maryland, Henson participated as a navigator and translator in six expeditions to the North Pole and was Peary’s most trusted member of the expedition that discovered the North Pole.

Born in Charles County, Maryland, in 1866, Henson went to sea at age 13 and for several years traveled all around the world. When he first met Peary, Henson was in his early 20s, and their shared sense of adventure bound them together for more than 20 years. Henson accompanied Peary on several attempts to reach the North Pole, which they finally reached together April 6, 1909.

The stamp is featured in the exhibition “Freedom Just Around the Corner: Black America from Civil War to Civil Rights” at the Smithsonian’s National Postal Museum, open through Feb. 15, 2016; it is a part of the U.S. Postal Service’s Black Heritage Series, the Postal Service’s longest-running commemorative stamp series. More information about the stamp can also be found at the museum’s site, Trailblazers and Trendsetters.