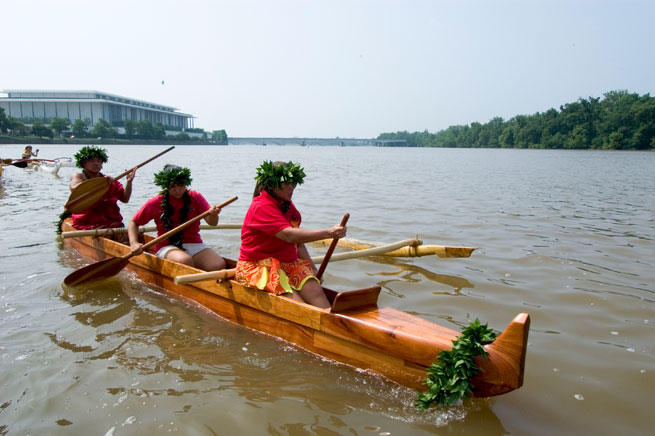 For thousands of years, Native Hawaiians have traveled the Pacific in traditional voyaging canoes like the one pictured here, shown on the Potomac River near Washington, D.C. Master canoe builder Wright Bowman Jr. began building the canoe from a whole log at the 1989 Smithsonian Folklife Festival on the National Mall and completed it in 2005.

On July 18, 2005, the canoe was launched in the Potomac River in a ceremony reminiscent of the Native Hawaii tradition to let canoes “drink of the sea” or be partially submerged using ocean water collected from the eight channels that separate each Hawaiian island. The ceremony accepts the canoe as a living entity, allowing the canoe to never want to “drink” again or sink. It was conducted by members of Friends of Hokule‘a & Hawai‘iloa, a nonprofit organization dedicated to Hawaiian canoe-building traditions.