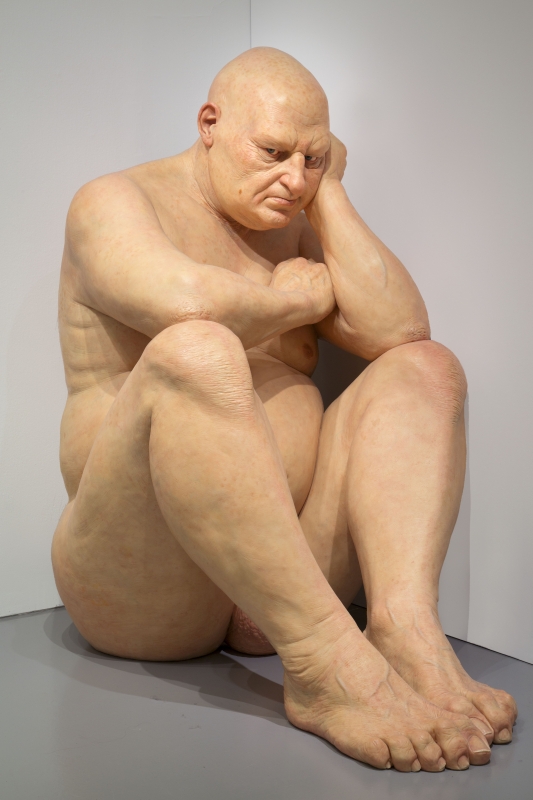 One of its most popular and photographed works, the twice-life-size “Untitled (Big Man)” crouches in the corner of the Smithsonian’s Hirshhorn Museum and Sculpture Garden. On view in the “Masterworks from the Hirshhorn Collection” exhibition through Aug. 6, 2017, “Big Man” glowers with piercing eyes. His drooling scowl, distended purple veins, tense hammer-toed feet and lumpy, blotchy skin enfold a pudgy physique.

Australian-born, London-based artist Ron Mueck (b. 1958) spends months modeling his figures in clay on armatures built from metal and chicken-wire to create forms that he casts in fiberglass resin or silicon. He completes a work by painting in specific details like blemishes and adding elements such as resin eyeballs and strands of monofilament, which are drilled or punched individually into surfaces to represent eyelashes, eyebrows, stubble and hair.

Mueck’s early career was as a model maker and puppeteer for children’s TV and films, notably the film Labyrinth, for which he also contributed the voice of Ludo, and the Jim Henson series The Storyteller.

A video about the artist and “Big Man” is available at https://www.youtube.com/watch?v=7EuFVfVSxik&feature=youtu.be.