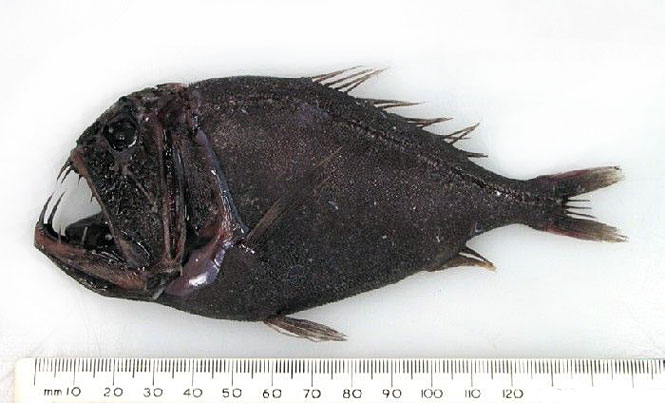 Anoplogaster cornuta have shortened, deep bodies with a characteristically large mouth lined with sharp, fang-like teeth, giving them their common name, fangtooth. This deep-sea fish can be found worldwide. They are commonly seen between 600 and 6,500 feet but have been observed as deep as 16,000 feet. The common fangtooth reaches a maximum length of just 6 inches.

Relative to body size, it has the largest teeth of any marine species; one of its most prominent features is a pair of long anterior fangs in the upper jaw. The largest two fangs of the lower jaw are so long in the adult fangtooth that is has a pair of opposing sockets on either side of the brain to accommodate the teeth its mouth is closed. It is uniformly dark brown to black in color, and most of its body is covered with thin, prickly scales and spines. The eyes are relatively small, set high on the head—to compensate for relatively poor eyesight, the fangtooth has developed an unusually prominent lateral line that helps it to sense movement and vibration from the surrounding water.

The Encyclopedia of Life is a free, collaborative online encyclopedia working to document all of the 1.9 million species of animals, plants and other forms of life on Earth. The Smithsonian was one of the original EOL consortium members and the Smithsonian’s National Museum of Natural History hosts the EOL headquarters. For more information, visit http://www.eol.org/.