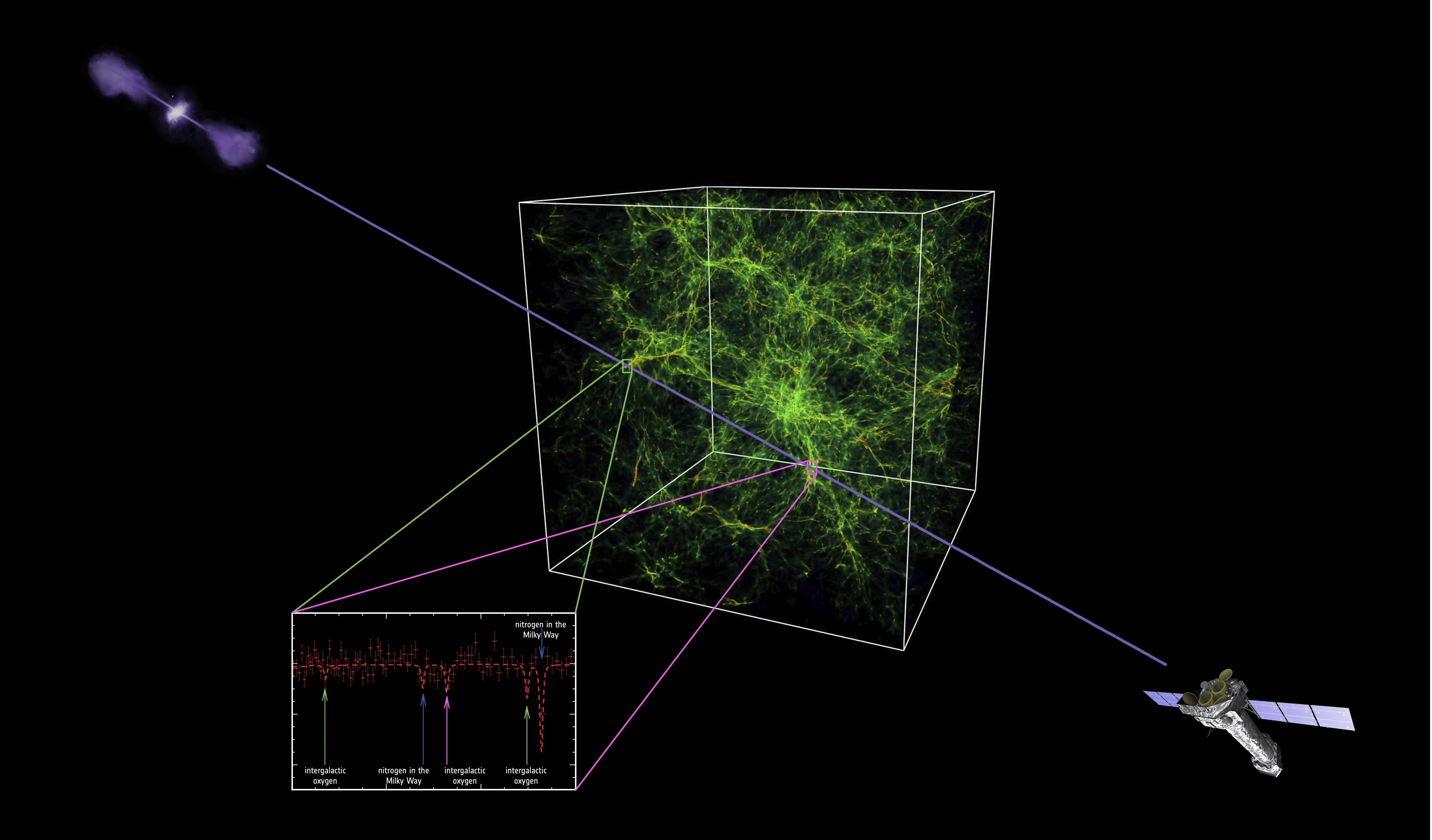 After a nearly 20-year-long game of cosmic hide-and-seek, astronomers using ESA’s XMM-Newton space observatory have finally found evidence of hot, diffuse gas permeating the cosmos, closing a puzzling gap in the overall budget of ‘normal’ matter in the Universe.

While the mysterious dark matter and dark energy make up about 25 and 70 percent of our cosmos respectively, the ordinary matter that makes up everything we see – from stars and galaxies to planets and people – amounts to only about five percent.

But even this five percent turns out to be hard to track down.

The total amount of ordinary matter, which astronomers refer to as baryons, can be estimated from observations of the Cosmic Microwave Background, which is the most ancient light in the history of the Universe, dating back to only about 380,000 years after the Big Bang.

Observations of very distant galaxies allow astronomers to follow the evolution of this matter throughout the Universe’s first couple of billions of years. After that, however, more than half of it seemed to have gone missing.

“The missing baryons represent one of the biggest mysteries in modern astrophysics,” explains Fabrizio Nicastro, lead author of the paper presenting a solution to the mystery, published today in Nature. Nicastro is from the INAF-Osservatorio Astronomico di Roma, Italy, and the Harvard-Smithsonian Center for Astrophysics (CfA) in Cambridge, Mass.

“We know this matter must be out there, we see it in the early Universe, but then we can no longer get hold of it. Where did it go?”

Counting the population of stars in galaxies across the Universe, plus the interstellar gas that permeates galaxies – the raw material to create stars – only gets as far as a mere ten percent of all ordinary matter. Adding up the hot, diffuse gas in the haloes that encompass galaxies and the even hotter gas that fills galaxy clusters, which are the largest cosmic structures held together by gravity, raises the inventory to less than twenty percent.

This is not surprising: stars, galaxies and galaxy clusters form in the densest knots of the cosmic web, the filamentary distribution of both dark and ordinary matter that extends throughout the Universe. While these sites are dense, they are also rare, so not the best spots to look for the majority of cosmic matter.

Astronomers suspected that the ‘missing’ baryons must be lurking in the ubiquitous filaments of this cosmic web, where matter is, however, less dense and therefore more challenging to observe. Using different techniques over the years, they were able to locate a good chunk of this intergalactic material – mainly its cool and warm components – bringing up the total budget to a respectable 60 percent, but leaving the overall mystery still unsolved.

Nicastro and many other astronomers around the world have been on the tracks of the remaining baryons for almost two decades, ever since X-ray observatories such as ESA’s XMM-Newton and NASA’s Chandra X-ray Observatory became available to the scientific community.

Observing in this portion of the electromagnetic spectrum, they can detect hot intergalactic gas, with temperatures around a million degrees or more, that is blocking the X-rays emitted by even more distant sources.

For this project, Nicastro and his collaborators used XMM-Newton to look at a quasar – a massive galaxy with a supermassive black hole at its center that is actively devouring matter and shining brightly from X-rays to radio waves. They observed this quasar, whose light takes more than four billion years to reach us, for a total of 18 days, split between 2015 and 2017, in the longest X-ray observation ever performed of such a source.

“After combing through the data, we succeeded at finding the signature of oxygen in the hot intergalactic gas between us and the distant quasar, at two different locations along the line of sight,” says Nicastro.

“This is happening because there are huge reservoirs of material – including oxygen – lying there, and just in the amount we were expecting, so we finally can close the gap in the baryon budget of the Universe.”

This extraordinary result is the beginning of a new quest. Observations of different sources across the sky are needed to confirm whether these findings are truly universal, and to further investigate the physical state of this long-sought-for matter.

Fabrizio and his colleagues are planning to study more quasars with XMM-Newton and Chandra in the coming years. To fully explore the distribution and properties of this so-called warm-hot intergalactic medium, however, more sensitive instruments will be needed, like ESA’s Athena, the Advanced Telescope for High-Energy Astrophysics, scheduled for launch in 2028.

“The discovery of the missing baryons with XMM-Newton is the exciting first step to fully characterize the circumstances and structures in which these baryons are found,” says co-author Jelle Kaastra from the Netherlands Institute for Space Research.

“For the next steps, we will need the much higher sensitivity of Athena, which has the study of the warm-hot intergalactic medium as one of its main goals, to improve our understanding of how structures grow in the history of the Universe.”

“It makes us very proud that XMM-Newton was able to discover the weak signal of this long elusive material, hidden in a million-degree hot fog that extends through intergalactic space for hundreds of thousands of light years,” says Norbert Schartel, XMM-Newton project scientist at ESA.

“Now that we know these baryons are no longer missing, we can’t wait to study them in greater detail.”