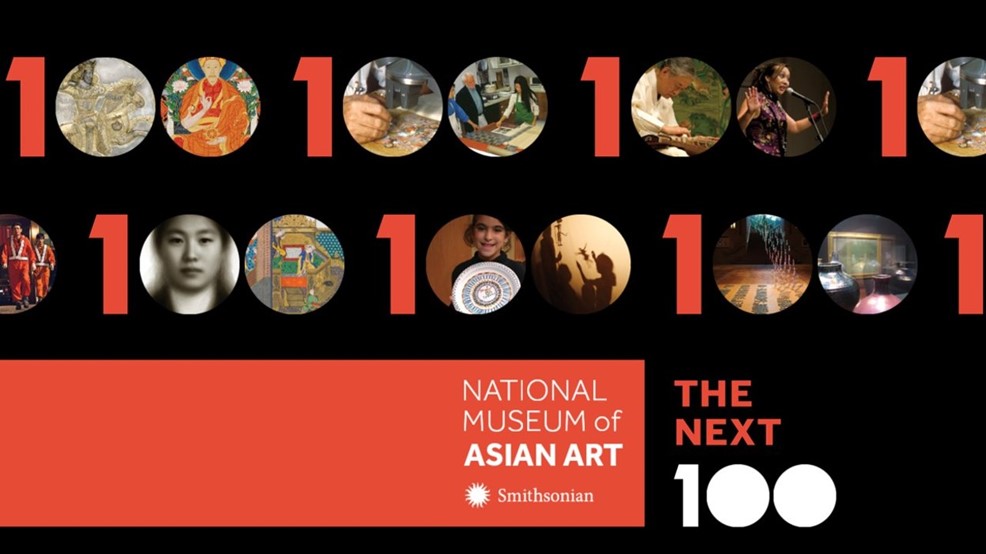 The National Museum of Asian Art has announced plans for its 100th anniversary. Beginning in November and continuing through 2023, the museum will celebrate its centennial with a year-long series of events and programs that deepen the understanding of Asian arts and cultures and reach new audiences. The activities, organized around the theme of “Journeys,” highlight the larger transformation of the museum into an institution engaged globally and locally.

A two-week festival, May 1, 2023–May 13, 2023, will celebrate Asian American and Pacific Islander Heritage Month—the museum’s first large-scale festival in recognition of this heritage month, and a cornerstone of the centennial celebrations.

Bank of America is the Presenting Sponsor of the Smithsonian’s National Museum of Asian Art’s Centennial.

Founded with a gift from Charles Lang Freer of some 9,500 works of art, the Freer Gallery of Art opened its doors to the public in 1923 as the United States’ first national museum of art. For the past 100 years, the museum has built one of the world’s most important collections of Asian art, organized dozens of influential exhibitions and led the fields of Asian art history, conservation and conservation science. The museum’s rich holdings bring the arts of Asia into direct dialogue with an important collection of 19th- and early 20th-century American works, providing an essential platform for creative collaboration and cultural exchange between the United States, Asia and the Middle East. New acquisitions are continually added to the collections, and the museum now showcases the richness of pre-modern Asian arts and the evolving visual cultures of Asia in the 20th and 21st centuries.

As it enters its second century, the museum is enhancing its strengths in conservation, curation and scholarship while exploring new ways of deepening and broadening its impact.

“The National Museum of Asian Art has played an essential role in fostering a greater understanding and appreciation of Asian art and its intersections with America for nearly a century,” said Lonnie Bunch, Secretary of the Smithsonian. “The museum’s centennial represents a unique opportunity to reflect on its past while looking toward its future in line with the Smithsonian’s wider goals of expanding the reach and impact of our nation’s collection. We welcome the public to join the museum as it marks this anniversary and sets its trajectory for the next 100 years.”

“The museum’s centennial will serve not only as a milestone for the institution and the Smithsonian but as a catalyst for the century ahead,” said Chase F. Robinson, Dame Jillian Sackler Director of the Arthur M. Sackler Gallery and Freer Gallery of Art, the National Museum of Asian Art. “Our vision is to transform the National Museum of Asian Art into a space where a wide range of visitors can come together to celebrate, learn about and interact with Asian art and cultures, including their intersection with America. In our second century, we’re becoming a space to convene, learn, reflect and forge connections through art.”

As it enters its second century, the National Museum of Asian Art is committed to serving as a national and global resource for understanding Asian arts and cultures and their intersection with the United States. For its centennial year, the museum is organizing a series of exhibitions, programs, initiatives and celebrations, all of which respond to a national and international imperative: that it foster, in a world that is increasingly interdependent and shaped by Asian societies, the deep respect and genuine cross-cultural understanding that results from engaging with art and culture.

The “Journeys" theme encourages long-standing and first-time visitors alike to chart their own path through the museum and the diverse artistic traditions of Asia.
Featured Permanent Galleries
New and reinstalled permanent installations mark the dynamism of the museum as it enters its second century and its shift to be more transparent, accessible and legible to the public.

Lead Exhibitions
The centennial is anchored by three lead exhibitions—each of which furthers the museum's vision for its next century—employing cutting-edge digital and immersive features and forging global partnerships:

“A Splendid Land: Paintings from Royal Udaipur” (Nov. 19–May 14, 2023): Presented in collaboration with The City Palace Museum in Udaipur administered by The Maharana of Mewar Charitable Foundation, “A Splendid Land” is a major survey of works from the city of Udaipur in Rajasthan, India. An ambient soundscape by the renowned experimental filmmaker Amit Dutta underscores the sensorial elements in the paintings, which center on local landscapes, lake systems and palaces. An accompanying program series explores cultural attitudes toward water and speaks to environmental racism, resource management and climate concerns in India and Washington, D.C.

“Anyang: China’s Ancient City of Kings” (Feb. 25, 2023–April 28, 2024): “Anyang: China’s Ancient City of Kings” is the first major exhibition in the United States dedicated to Anyang, the capital of ancient China’s Shang dynasty. “Anyang” brings together more than 200 objects from the museum’s collection to examine the Shang state and the artistic achievements of those who lived in its capital over 3,000 years ago. The presentation will include digital activations developed in partnership with the award-winning production studio UNIT9 that will help visitors understand the city and the importance of its rediscovery.

“Ay-Ō’s Happy Rainbow Hell” (March 25, 2023–Sept. 10, 2023): Known as the “Rainbow Artist,” Ay-Ō is internationally regarded for his experiential works and prismatic silkscreen prints that make prominent use of a bright rainbow aesthetic. “Ay-Ō’s Happy Rainbow Hell” is the first museum exhibition dedicated to the artist’s work in the United States. It will be accompanied by the first English-language publication on the artist. The exhibition of artworks will be augmented by an interactive gesture wall and digital haptic boxes, allowing audiences to experience Ay-Ō’s world.

Public Programs
From May 1, 2023–May 13, 2023, the museum and its surroundings on the National Mall will celebrate Asian arts and cultures with keynote speakers, headline performers, interactive experiences, culinary adventures and community projects. This cornerstone of the centennial programming is the first such major festival celebrating Asian American and Pacific Islander Heritage Month organized by the museum.

As part of the festival and in partnership with Washington Performing Arts and the United States Air Force Band, the museum will present Angel Island, the Washington premiere of acclaimed composer Huang Ruo’s oratorio inspired by poetry written by immigrants on the walls of the Angel Island detention center in San Francisco. A 1920s silent film with live accompaniment by Min Xiao-Fen is also part of the festivities.

A series of 2023 “Journeys” public programs throughout the year experiment with new forms of storytelling and create opportunities for visitors and staff to share their own experiences. Throughout the year, a dedicated film series allows audiences to travel through the eyes of filmmakers. Other 2023 partners include Pulitzer Prize-winning author Viet Thanh Nguyen, contemporary artists such as Ravi Agarwal, Musicians from Marlboro and the Shanghai Quartet and numerous Asian embassies and cultural centers. Annual celebrations like Nowruz, Diwali, the National Cherry Blossom Festival and Lunar New Year create journeys through cultural practices.

As part of the centennial celebrations, the museum is also presenting a landmark number of scholarly programs, with major symposia on every discipline in the museum. Finally, a transformative web redesign creates opportunities for digital storytelling, interactive features and lecture series available to anyone, anywhere to join the centennial “Journeys.”

Full details on the National Museum of Asian Art’s centennial programming will be announced in the coming months. Follow asia.si.edu/centennial, #TheNext100 and @NatAsianArt for updates.

Sponsor
Bank of America is the Presenting Sponsor of the Smithsonian’s National Museum of Asian Art’s Centennial.

About the National Museum of Asian Art

The Smithsonian’s National Museum of Asian Art is committed to preserving, exhibiting, researching and interpreting art in ways that deepen our collective understanding of Asia and the world. Home to more than 45,000 objects, the museum stewards one of North America’s largest and most comprehensive collections of Asian art, with works dating from antiquity to the present from China, Japan, Korea, South Asia, Southeast Asia and the Islamic world. Its rich holdings bring the arts of Asia into direct dialogue with an important collection of 19th- and early 20th-century American works, providing an essential platform for creative collaboration and cultural exchange between the United States, Asia and the Middle East.

Beginning with a 1906 gift that paved the way for the museum’s opening in 1923, the National Museum of Asian Art is a leading resource for visitors, students and scholars in the United States and internationally. Its galleries, laboratories, archives and library are located on the National Mall in Washington, D.C., and are part of the world’s largest museum complex, which typically reports more than 27 million visits each year. The museum is free and open to the public 364 days a year (closed Dec. 25), making its exhibitions, programs, learning opportunities and digital initiatives accessible to global audiences.