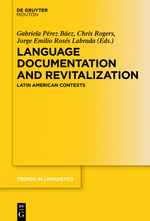 A new book co-edited by Gabriela Pérez Báez, director of the Smithsonian’s Recovering Voices program, examines language revitalization in Latin America and the challenges facing linguists who are working to counter the loss of indigenous languages throughout the world.

Many of the more than 6,000 languages spoken around the world are in danger of going silent as speakers shift to languages that are more broadly spoken outside their local communities. Awareness of this decline has grown for the past few decades, and linguists and native speakers in many communities are working together to revitalize endangered languages and preserve the cultural knowledge associated with them.

“This is a time in which language revitalization is growing as a field of research and advocacy,” said Gabriela Pérez Báez, curator of linguistics at the Smithsonian’s National Museum of Natural History and co-editor of the new book, Language Documentation and Revitalization in Latin American Contexts, volume 295 of the Trends in Linguistics series (http://www.degruyter.com). “We are hoping that this volume will help draw attention to the urgency we face in documenting, and more importantly, revitalizing these languages before it is too late. I think it is important to begin sharing knowledge about how revitalization works in as many parts of the world as possible, what challenges exist, and what approaches may be taken to sustain endangered languages and cultural knowledge.”

Although linguists are collaborating with speakers of endangered languages all over the world, the academic literature documenting these efforts and recommending best practices has focused largely on Canada, the United States and Australia. However, as the book’s case studies demonstrate, conditions, resources and challenges are different in Latin America, where more than a third of the world’s language families are spoken.

Pérez Báez edited the book with colleagues Chris Rogers at Brigham Young University and Jorge Emilio Rosés Labrada at the University of British Columbia. She says its focus on language revitalization reflects the priorities of the Smithsonian’s Recovering Voices program. Recovering Voices is led by the National Museum of Natural History, in partnership with the Smithsonian’s National Museum of the American Indian and the Smithsonian Center for Folklife and Cultural Heritage, and it aims to understand and respond to language and knowledge endangerment. The museums’ extensive collections of archival, biological and cultural materials are valuable resources for reclaiming and revitalizing languages, and the program actively collaborates with communities and partner organizations to increase access to these materials.

Pérez Báez said recommendations for best practices that had grown out of researchers’ experiences in Canada, the United States and Australia had caused frustration for linguists working in Latin America. “For those of us going to places like Mexico or Central and South America, the situation did not match the circumstances in the United States, Canada or Australia,” Pérez Báez said. “We felt we were acting in an ethical and collaborative manner, but our actions were not in line with what was being prescribed because the cultural makeup and other factors were very different.”

Pérez Báez explains that some linguists have argued that language revitalization efforts must always be initiated within a community, not proposed by an outside researcher. In her work with speakers of San Lucas Quiaviní Zapotec in Oaxaca, Mexico, language shift was imperceptible to people in the village. While the language remained vital there, it was being lost among the part of the community who migrated to Los Angeles, where children learn Spanish and English instead of Zapotec. In 20 years, Pérez Báez said, the language had lost half its speakers: “I felt I couldn’t stay silent, even though there was no fear in the community that the language was endangered. There are situations that call for a proactive stance from the linguist.”

Case studies highlight the limited resources and infrastructure that linguists often encounter in Latin America. Researchers collaborating with remote communities in the Amazon are less likely to find electricity and internet access than colleagues working on tribal lands in North America, for example. Other examples detail how linguists have dealt with limited financial resources and political support for language revitalization projects and highlight challenges associated with the rich diversity of languages in Latin America, where different dialects of the same language can be numerous and mutually unintelligible, each demanding unique resources to help preserve them.

The case studies presented in the book are not meant to dictate specific approaches for community-based linguistics research in Latin America. Rather, Pérez Báez and her colleagues want to offer broader context for researchers in the field. The work complements recently published books covering language documentation and revitalization efforts in Asia and Africa, she adds.