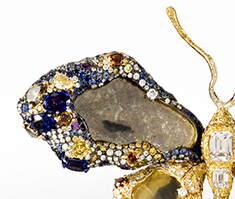 The National Museum of Natural History has received four separate gifts of remarkable gemstones and jewelry pieces, including the Cullinan Blue Diamond Necklace, for the Smithsonian’s National Gem Collection in celebration of the 100th anniversary of the museum. In addition to the Cullinan, the museum has received the Tourmaline Triplets, the Royal Butterfly Brooch and the Whitney Alexandrite. The beautiful and historic specimens in the National Gem Collection, including the Hope Diamond, attract millions of visitors to the Janet Annenberg Hooker Hall of Geology, Gems and Minerals every year, making it one of the most popular exhibition halls in the entire Smithsonian.

“Since the museum first opened its doors to the public in 1910, gifts such as these have helped the National Gem Collection become one of the largest and most important of its kind,” said Jeffrey Post, curator of the National Gem Collection. “These four new pieces will further enhance the beauty and scientific stature of the collection, and provide an enduring legacy for future generations of museum visitors.”

The Cullinan Blue Diamond Necklace features a bow motif with nine sparkling and extremely rare blue diamonds. Along with the total of 5.32 carats of blue diamonds, 251 other diamonds were used to craft this “consolation” gift from the legendary South African diamond magnate, Thomas Cullinan, to his wife, after he promised to find for her the largest diamond in the world. Although he did discover the massive, nearly flawless 3,106.75 carat Cullinan Diamond in 1905, which was given to England’s King Edward, he instead created the strikingly beautiful Cullinan Blue Diamond Necklace that he presented to his wife, Anne.

In the years that followed, the necklace was passed down to the first daughter in each successive generation, ending with Thomas Cullinan’s great-granddaughter, Anne Robinson. In 1992 she sold the family heirloom to Stephen Silver of Stephen Silver Fine Jewelry, whose aspiration was to see the necklace as a part of the National Gem Collection. This goal was realized Sept. 27 when the Cullinan Blue Diamond Necklace went on exhibit in the Harry Winston Gallery, adjacent to the Hope Diamond.

“I’m proud to have given this gift to the National Gem and Mineral Collection, to allow visitors to the Museum the opportunity to view and learn the history of this extraordinary necklace,” said Silver. The Cullinan Necklace will remain on public view in the Winston Gallery through the spring of 2011 before moving to its home in the National Gem Gallery.

The Tourmaline Triplets are a rare example of extremely fine, well-matched, tricolor elbaite tourmalines. At 60.13, 75.25 and 90.03 carats, they total approximately 225 carats. The multihued stones are nearly identical and all feature an elongated octagonal step cut. The distinctive color zoning results from different impurity atoms that were incorporated into the growing crystal, and in the case of the triplets, transitions from a vivid deep green on one side, to yellow and orangey-red, and settling on red on the other side. Tim and Tom Schmitt of Schmitt Jewelers bought the first stone from Mozambique in November 2008, later acquiring the second and third, and sold them to an anonymous Arizona couple who then donated the gemstones to the Smithsonian. The Triplets are currently on public view in the museum’s National Gem Gallery.

Created in 2009 by Cindy Chao to commemorate her metamorphosis from a jewelry designer to a jewelry artist, the Royal Butterfly brooch is a three-dimensional objet d’art set with 2,318 gems totaling a near 77 carats. One of its most intriguing design attributes is the use of four large rough diamond slices atop a layer of faceted diamonds, forming the centers of the wings. These rough diamond slices feature a faceted top and flat bottom with a natural pattern resembling the microstructure of a butterfly’s wing. The butterfly radiates with life due to the fancy-colored sapphires, rubies, fancy-colored diamonds, and tsavorite garnets with which it is set both front and back, in order to be admired from all angles. Chao generously presented this meticulously detailed and crafted piece of jewelry and art to National Gem Collection in 2010, ensuring that generations to come may enjoy the colors, gems, and craftsmanship of this timeless piece.

These significant gifts join the unique 17.08 carat, color-changing Whitney Alexandrite from Coralyn Wright Whitney that was added to the collection earlier this year. The extraordinary alexandrite is on view in the National Gem Gallery, where it has become a favorite of museum visitors.

The Smithsonian’s gem and mineral collection, with 10,000 gems and 375,000 mineral specimens, is one of the largest of its kind in the world. The collection is for exhibitions and scientific research. It traces its origins to the minerals that were bequeathed by James Smithson along with the money he designated to the United States to establish the Smithsonian Institution. The National Museum of Natural History received a donation of 1,316 gems in 1894, and in 1958, New York jewel expert and jeweler Harry Winston gave the Hope diamond, which triggered more donations, resulting in the now-famous National Gem Collection—a must-see exhibition for Smithsonian visitors.