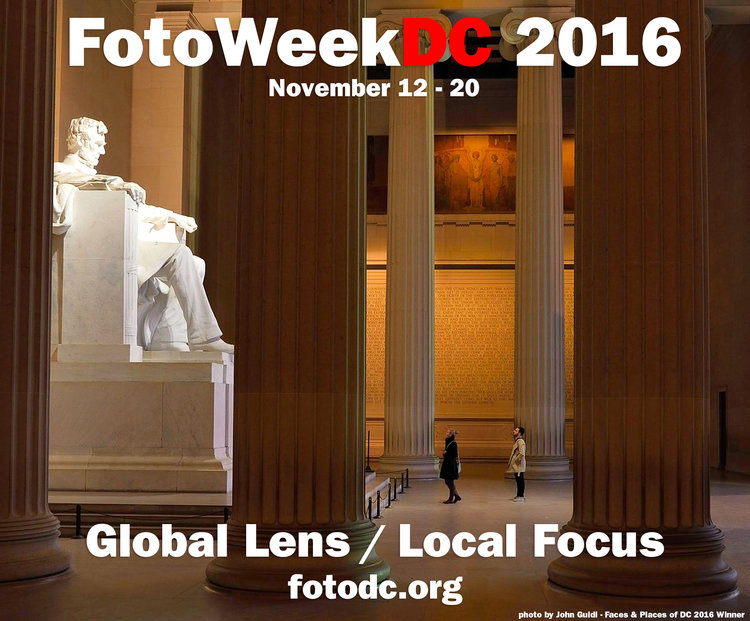 he Smithsonian is partnering with FotoWeekDC for its annual FotoWeekDC Festival Nov. 12–20. Exhibitions at 10 Smithsonian museums are on view during the festival and beyond.

At the height of the Harlem Renaissance, Carl Van Vechten (1880–1964) picked up a camera and discovered the power the photographic portrait has over the photographer. Through the decades, his fascination with the medium remained strong and he asked writers, musicians, athletes, politicians and others to sit for him—many of them central figures in the Harlem Renaissance whose accomplishments fueled not only the New Negro movement but also transformed the broader American culture throughout the 20th century. “Harlem Heroes: Photographs by Carl Van Vechten” features 39 of Van Vechten’s images, all works from the museum’s permanent collection. This is their first presentation as a whole since they were acquired. (On view through March 19, 2017)

Gauri Gill (b. 1970) has been photographing the marginalized communities of western Rajasthan, India, since the late 1990s. From her vast archive of negatives, collectively titled “Notes from the Desert,” Gill often organizes series centered on a particular individual or idea. “Notes from the Desert: Photographs by Gauri Gill,” showcases 57 prints from this major body of work, including three large-scale portraits from the “Balika Mela” series (2003/2010) and a body of prints titled “Jannat.”

The exhibition is striking for Gill’s use of black-and-white photography to capture life in this remote desert landscape in India. It is the third in a series of exhibitions highlighting artists and works in Freer Gallery of Art and Arthur M. Sackler Gallery’s growing collection of contemporary photography from Asia. The exhibition is organized by the Sackler with support from the museum’s endowment for contemporary Asian Art. (On view through Feb. 12, 2017)

Nature photographers travel the globe to document its vast beauty and diversity. They brave the elements to create images that transport people into the natural world and inspire a sense of wonder. Their memories are people’s discoveries, and their visual storytelling from the field rekindles passion for outdoor adventure. Every year extraordinary talent is recognized through the Nature’s Best Photography Windland Smith Rice International Awards, a global photo competition open to the public. Named for nature photographer and conservationist, Windland Smith Rice, the exhibition presents a collection of 83 fine-art prints accompanied by a video. (On view through September 2017)

“Primordial Landscapes: Iceland Revealed” combines stunning photographs with sound and lighting effects to take visitors on a memorable journey through some of Iceland’s most breathtaking and mysterious natural landscapes. It showcases Iceland as a geologically active wonder, with diverse and magnificent landscapes. The primordial quality of Icelandic landscapes offers a behind-the-scenes look at how the planet was formed and continues to evolve. The 41 photographs featured in the exhibition were taken by Feodor Pitcairn, award-winning photographer and cinematographer. (On view through April 2017)

“100 Years of America’s National Park Service: Preserve, Enjoy, Inspire” features more than 60 images of America’s national parks where wildlife, culture, history and people come together. The exhibition shares stories of how the museum and the National Park Service have collaborated throughout their shared histories to preserve America’s cherished natural and cultural heritage sites and treasures for future generations to experience forever. (On view through August 2017)

“In the Groove: Jazz Portraits by Herman Leonard” from the museum’s collection features Leonard’s iconic images of jazz legends such as Duke Ellington, Ella Fitzgerald, Dizzy Gillespie, Billie Holiday, Thelonious Monk and Sarah Vaughan. Leonard’s extraordinary photographs are widely regarded as the definitive portraits of many of the 20th century’s greatest jazz artists. Enthralled by the music and those who made it, Leonard began haunting the New York’s jazz clubs after opening his first studio in Greenwich Village in 1948. Armed with his Speed Graphic camera, Leonard made images that captured the very essence of a live jazz performance. (On view through June 4, 2017)

“The Outwin 2016: American Portraiture Today,” an exhibition resulting from the Outwin Boochever Portrait Competition, features works from 43 artists from across the nation. Of the pieces in the exhibition, 19 out of 43 are photographs; the others works are sculptures, mixed-media pieces, paintings and drawings. (On view through Jan. 8, 2017)

American baseball legend Babe Ruth was an icon and media sensation. Before the commercialization of sports superstars became commonplace, Ruth’s name and image fueled a marketing frenzy. “One Life: Babe Ruth” highlights his memorable persona in a selection of historic prints, photographs and personal paraphernalia representing “the Babe” both as a Yankee slugger and a national celebrity. (On view through May 21, 2017)

Who were Abraham Lincoln’s contemporaries? They included many fascinating people beyond the politicians and military leaders of the Civil War. The exhibition “Lincoln’s Contemporaries” features Mathew Brady’s portraits of 20 celebrities—from showman P.T. Barnum and inventor Samuel Morse to musician Teresa Carreño and clergyman Henry Ward Beecher—who reflect the diversity of American intellectual and cultural life during Lincoln’s presidency. (On view through May 19, 2017)

“For a Love of His People: The Photography of Horace Poolaw” is a retrospective of work by photographer Horace Poolaw (Kiowa, 1906–1984), whose black-and-white images document Native Americans of rural Oklahoma with affection while providing insight into the values of community life of his time. Through the themes of portraiture, community, family, military and performance, the exhibition gives a glimpse of Native life in 20th-century Oklahoma. (On view through June 4, 2017)

When Smithsonian photographer and museum specialist Carolyn Russo looks at an airport tower, she sees its unique personality traits. For nearly 10 years, she traveled to 23 countries to photograph airport towers and share their beauty and history with the world. In “Art of the Airport Tower,” Russo explores the varied forms and functions of air traffic control towers throughout aviation history and interprets them as monumental abstractions, symbols of cultural expression and testimonies of technological change. These 50 images bring a heightened awareness to the simple beauty of the airport tower and a call for their preservation in the airport landscape. The exhibition is open until Nov. 30.

The public is invited to a special after-hours program Nov. 18 from 6 to 8 p.m. to tour the exhibition. During the event, Russo will discuss her creative process and inspiration for the project, while mixing in a few good stories from the road—and tarmac. Photographer Sam Krisch, renowned for his iPhone photography, will explain how to get the most from a camera phone. The museum will also open its photo archives to show some of the wackiest photos in the collection and share the stories behind them.

The evening will feature light refreshments and a cash bar; all participants must be 21 or older, and a valid ID is required for entry. Tickets are $20 and must be reserved in advance.

“Celebration: Snapshots of African American Communities” is a display of 22 photographs that reflect the diversity of the African American experience. The photos come from two collections in the museum’s Archives Center that depict special occasions and everyday life in African American communities: the Scurlock Studio Collection and the Fournet Drug Store. (On view through Dec. 7)

Bettina Pousttchi has often contemplated systems of time and space in her art. She created “World Time Clock” over the course of eight years, traveling the globe and making a portrait of a public clock in each of 24 time zones. Representing locales as disparate and far-flung as Bangkok, Moscow, Los Angeles and Tashkent, Uzbekistan, the photographs each show a clock displaying the same local time: five minutes before two. Together the images suggest a sense of suspended time and what the artist calls “imaginary synchronism.” Seen in close-up, the clocks are united in a single scheme that calls to mind the historic role of Washington as the site of the International Meridian Conference in 1884. It was here that the Greenwich Meridian was adopted as a universal standard, determining a zero point for the measurement of both longitude and time. (On view through May 14, 2017)

Through images and narrative, including graphically stylized commentary, “Bridging the Americas: Community and Belonging From Panama to Washington, D.C.,” tells of the personal experiences of Panamanians and Zonians living in and commuting and navigating between the nation’s capital area and Panama.

The exhibition uses as a historical backdrop the formal ties established between the U.S. and Panama since the California Gold Rush through the 100th anniversary of the Panama Canal in 2014. In addition to new research and contributions from Washington, D.C.–area residents with varying ties to Panama, the bilingual presentation incorporates the museum’s archival material and images from a variety of sources, including donations from community members, the collections of other Smithsonian units and the Smithsonian affiliate Museo de Canal Interoceánico de Panama. (The exhibition is on view indefinitely.)

The earliest-known photograph of the Smithsonian Castle is currently on view in the building’s Great Hall. The photograph was taken in 1850 during the Castle’s construction and shows the two completed wings of the building. At the time of this photograph, only two of the Castle’s nine towers were completed. The crane in the image rises over the North Tower, which would eventually soar 140 feet above the National Mall. The carriage porch at the front of the building would not be completed until late 1851.

Brothers William and Frederick Langenheim of Philadelphia took the photograph using a new process they developed in 1849 and called hyalotype (from the Greek hyalos, meaning glass, and typos, meaning image or impression). This process produced a glass negative instead of the paper negative of the talbotype process. The glass negative could then be used to print either paper photographs or glass lantern slides. The image of the Castle was part of a set of 126 views published by the brothers in 1850. (The exhibition is on view indefinitely.)