Visitors to the Free Festival Can Experience the Creativity and Culture of the Mediterranean
June 19, 2018
News Release 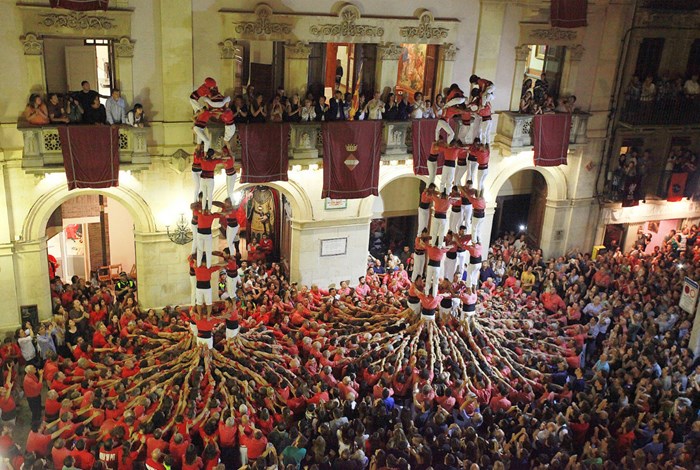 The 2018 Smithsonian Folklife Festival celebrates the vitality, inventiveness and community built by the Catalan people in this year’s program, “Catalonia: Tradition and Creativity from the Mediterranean.” Catalonia, a region in northeastern Spain, has been defined by its thousand-year history of social and cultural mixing. Newcomers to the region are actively integrated into its vibrant culture, while traditional craft, food and festivity continue to flourish and fuel cultural enterprise.

During the 10 days of the festival, visitors can experience the buzzing activity of a Catalonian plaza, a public space brimming with art installations, music, food, wine, performance and the spirit of “convivència.”

“This year’s Festival focuses on creative enterprises—cultural activities that produce economic and social value for communities around the world,” said Michael Atwood Mason, program co-curator and director of the Center for Folklife and Cultural Heritage. “We are focusing on Catalonia because it has a long history of creating formal and informal organizations that aim to sustain a strong sense of local identity.”

Human Towers: Building “castells” or looming towers of people stacked on top of one another have a 200-year history in Catalonia. Human towers can include more than 100 people, and reach heights of more than 30 feet in the air. The building of a human tower on the National Mall is an epic not-to-be missed visual spectacle. Large performances are scheduled for July 7 and 8. See the festival calendar for details.

Foodways and Wine: Catalans are actively engaged in cultural enterprises that sustain and transform their traditional art forms. The revitalization of artisanal food and wine production across the region is a result of producers experimenting with new methods and products, like using squid ink to flavor the rice that has grown there for thousands of years. Visitors to the festival can learn about Catalonia’s innovative gastronomy while experiencing the bold flavors of the Mediterranean through a variety of tastings, demonstrations and cooking classes.

Performance: Streets in Catalonia are often animated through performance, whether the festivities are in tribute to particular holiday or celebrating the sounds of contemporary music rooted in traditional rhythms. Gypsy flamenco gave rise to rumba catalana, and Cuban beats helped forge the havaneres style still performed today. The festivals stages host lively performances each day of music, and folk dance, while its grounds bring to life the jubilant atmosphere of Catalonia’s signature street festivals through parades populated by giants and devils, big heads and beasts. Select evening concerts are followed by Catalan torch processions and a special fireworks display.

“Catalonia: Tradition and Creativity from the Mediterranean” program partners include the Government of Catalonia’s Department of Popular Culture and Cultural Associations; the Provincial Governments of Barcelona, Girona, Lleida and Tarragona; the Fira Mediterrània de Manresa; the Institut Ramon Llull; Adifolk: the Association for the Diffusion of Folklife; and Grifols USA LLC.

The Festival strives to maintain an accessible and inclusive environment for visitors of all abilities. Information about Accessibility Services may be found at: festival.si.edu/accessibility. For more information on the 2018 Smithsonian Folklife Festival, visit https://folklife.si.edu/ and follow the festival on Facebook, Twitter, Instagram and YouTube.