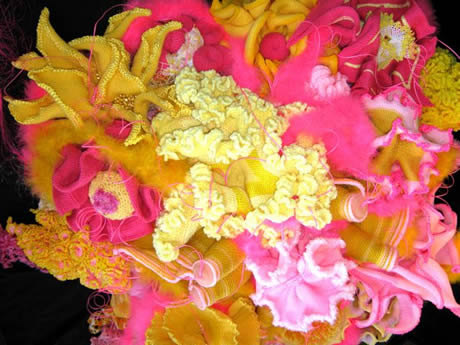 The Smithsonian’s National Museum of Natural History will host a unique exhibition, the “Hyperbolic Crochet Coral Reef,” a thought-provoking fusion of science, conservation, mathematics and art. By engaging local communities to crochet coral reefs, the exhibition celebrates their beautiful diversity and speaks to the urgent need to protect these vanishing ecosystems. Created and curated by Margaret and Christine Wertheim at the Institute For Figuring, this exhibition will be in the Sant Ocean Hall focus gallery Oct. 16 – April 24, 2011.

Currently, climate change, ocean acidification, overfishing, invasive species and pollution threaten the very existence of coral reefs around the world. Nancy Knowlton, the Sant Chair for Marine Science at the museum and the Smithsonian’s science advisor for the exhibition, has focused much of her research on these endangered ecosystems.

“The reefs that I studied 35 years ago have largely vanished, and most reefs may well be gone by the end of the century, or sooner, if nothing is done to protect them,” said Knowlton. “This project is a stark reminder that if trends continue, an exhibition like this may someday be the only way for people to experience the beauty of coral reefs.”

Shocked by the accelerating demise of corals around the globe, the Wertheims took action, deciding to tell the story of coral reefs—their beauty and the threats they face—through crochet.

As the name suggests, the “Hyperbolic Crochet Coral Reef” also incorporates the world of mathematics. Throughout the ocean, the diverse forms of kelps, corals and sea slugs are variations of a geometric form known as hyperbolic space. Mathematicians had long believed this type of geometry was impossible to represent physically, even though it has existed within nature for hundreds of millions of years. Finally, in 1997, Cornell University’s Daina Taimina realized that models of hyperbolic space could be created using crochet—a discovery that astonished the mathematical world.

The Wertheims, inspired by the Great Barrier Reef in their native Queensland, Australia, harnessed this discovery and started crocheting a coral reef. For the past five years they have been working with communities all over the world to build a global network of crochet reefs that has become an ongoing collective experiment. Since the project began, satellite reefs have been created in Chicago; New York; London; Dublin; Scottsdale, Ariz.; Sydney; and Riga, Latvia. The participation of such a vast variety of communities has created a collection of crocheted corals as distinctive and diverse as their living counterparts.

“Wooliness and wetness aren’t exactly two concepts that you would initially pair together, but now this project reaches across five continents and has roots that extend into the fields of mathematics, marine biology, feminine handicraft and environmental activism,” said co-creator Margaret Wertheim. “It’s taken on a viral dimension of its own, and in a beautiful way the development of the project parallels the evolution of life on Earth.”

In association with the exhibition opening this fall, the museum has launched the Smithsonian Community Reef, the newest satellite of the global Hyperbolic Crochet Coral Reef project. The Smithsonian Community Reef boasts more than 200 participants from the Washington, D.C., area, including Maryland and Virginia, and at least 15 other states, including Arizona, California, Connecticut, Florida, Hawaii, Illinois, Michigan, New Mexico, Ohio and Washington and as well as Spain, Ireland and the United Kingdom and promises to be one of the largest community reefs ever produced. A portion of the Hyperbolic Crochet Coral Reef is currently on display at the Smithsonian’s Cooper-Hewitt, National Design Museum. The Smithsonian Community Reef is made possible through the support of the Quiksilver Foundation, the Embassy of Australia and the Coral Reef Alliance.

Volunteers are crocheting enthusiastically throughout the summer to produce a 10-by-16-foot reef that will be displayed together with the “Hyperbolic Crochet Coral Reef” exhibition. Jane Milosch, senior program officer in the Office of the Under Secretary for History, Art and Culture, and a curator of contemporary craft, is an advisor to the project.

“The community aspect of the Smithsonian’s in-progress reef heightens our appreciation for the handmade and our awareness that individual actions can have a powerful, collective impact on the environment,” said Milosch.

The museum welcomes participation in this exciting collaborative fiber-art project to raise awareness about the threats to coral reefs. Contributions can be submitted by mail or delivered in person and will be accepted for inclusion in the Community Reef, provided they meet the deadline and guidelines available by e-mail at sicommunityreef@yahoo.com or by visiting Flickr and Ravelry at “Smithsonian Community Reef” under groups. To learn more about the “Hyperbolic Crochet Coral Reef” exhibition, visit http://www.mnh.si.edu/exhibits/hreef/index.html.