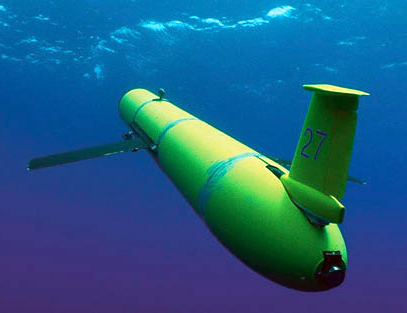 The Scarlet Knight, an 8-foot autonomous underwater glider, was unveiled Dec. 9 as the newest temporary exhibit in the National Museum of Natural History’s Sant Ocean Hall. The glider recently made history as the first robot to successfully cross the Atlantic Ocean. This underwater expedition, spearheaded by undergraduate students from Rutgers University, has provided data to help scientists better understand how climate change is affecting the ocean.

The Scarlet Knight glider traveled to Spain, tracing the 517-year-old path of Columbus’ ship, the Pinta, from the New World. As the first underwater robotic vehicle to cross the ocean, the Scarlet Knight now spans the entire “Deep Ocean” display case in the Ocean Hall as a testament to human exploration and technology. The expedition was made possible through the scientific, academic and international collaborations of the National Oceanic and Atmospheric Administration, Rutgers University, the White House and the town of Baiona, Spain. It is now embarking on another journey at the Smithsonian to educate and inspire future generations of explorers.

“We are very pleased to showcase this milestone in ocean research and exploration here in the Sant Ocean Hall,” said Eva Pell, Smithsonian’s Under Secretary for Science. “The story of the glider and the undergraduate students who monitored its journey shines light on the mysteries of the oceans; it speaks to the importance of technological creativity to mine those secrets and to education as a vehicle to achieve the goal of understanding the greatest resource of our planet.”

The glider, with no engine to propel it forward, rode the ocean currents and made a series of 10,000 dives and ascents in order to collect data on ocean circulation, the heat content of the upper layer of the ocean and the transport of this heat through oceanic circulation as it crossed the Atlantic.

Descents involved pumping a small volume of water into its nose causing it to sink and unequal buoyancy along the fuselage would send the glider 150 to 180 meters down the water column.

Ascending involved the reverse: pumping approximately a cup of water into the tail causing a glide upwards. This pattern of dive-and-ascend cycles continued for 4,600 miles; they lasted approximately 40 minutes each. The glider stayed almost continually underwater, surfacing only three times a day to check its location, transmit data and download new piloting instructions from home via an Iridium telephone on its tail. Fishing nets and wildlife posed dangers, but through continued collaboration with fishermen during the glider’s first hazardous week, the Scarlet Knight achieved all mission objectives.

Baiona was the destination point of the Pinta as it returned to Spain bearing news of the New World 517 years ago and was the destination for the Scarlet Knight after its 221-day underwater voyage bearing news of the unseen world. The glider even followed the same course on the
north-and-east flowing Gulf Stream, and faced the same predicaments presented by channels surrounding Spain. Like the Pinta, the Scarlet Knight opted for the northern route around a large eddy and then a turn east.

Before the success of Scarlet Knight, access to the ocean limited ocean science. The glider provides the opportunity to learn more about the most influential aspect of the Earth and people’s lives.