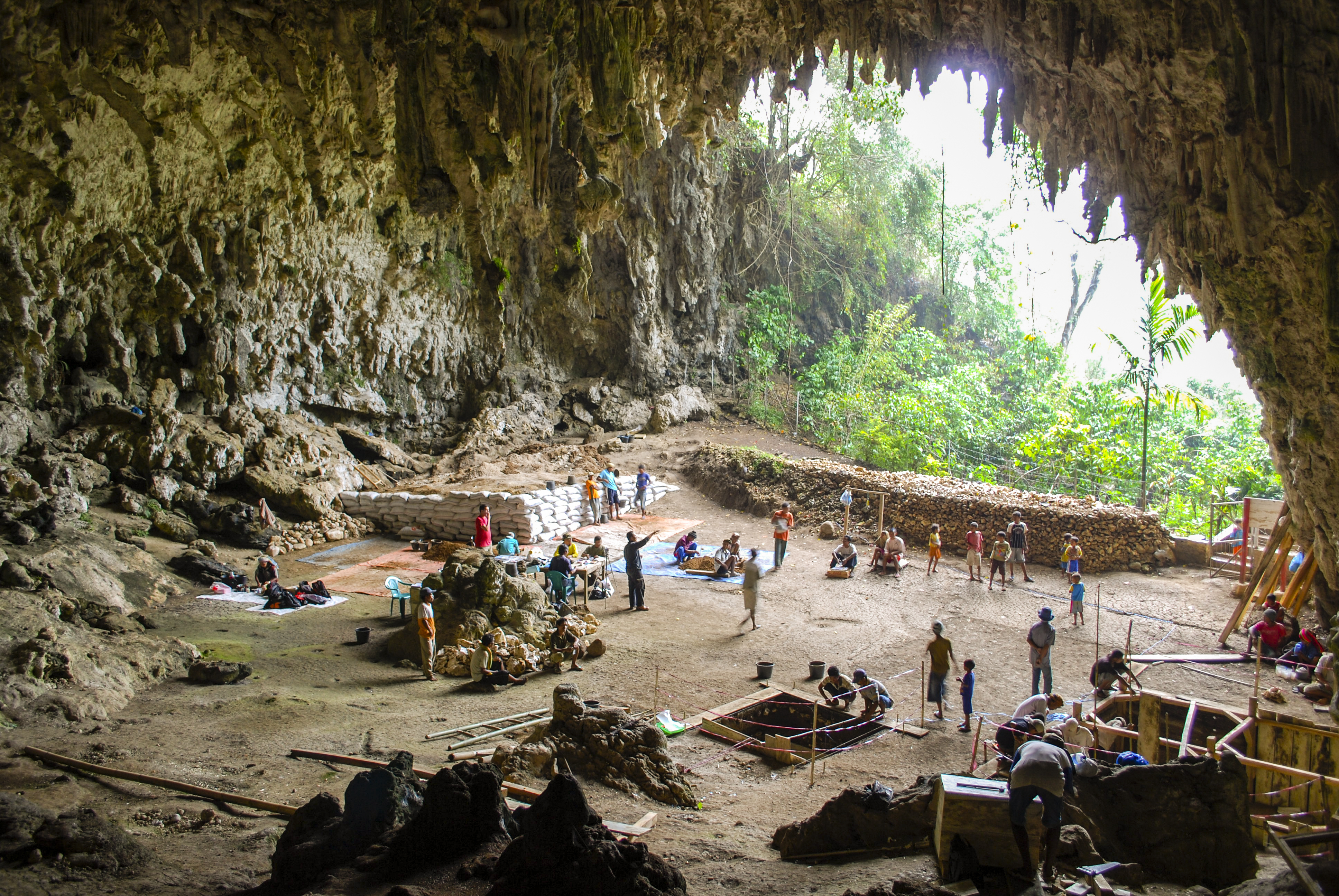 Eight years of further excavations and study at the Indonesian cave site of Liang Bua have pushed back the time of disappearance of the “hobbits” of Flores (Homo floresiensis) from as recently as 12,000 years ago to about 50,000 years ago—around the same time that modern humans first dispersed through the wider region and reached Australia. The new findings are reported by Smithsonian scientist Matt Tocheri and an international team of researchers in the journal Nature.

In 2003, archaeologists uncovered the remains of a human skeleton roughly 6 meters (20 feet) beneath the present-day surface of Liang Bua. The skull revealed an extremely small, chimpanzee-sized brain (about 400 centimeters, cubed) and the limb bones showed that this fully grown adult would have stood about 106 centimeters (3.5 feet) tall. In overall appearance, it was most similar to fossil human species that lived in Africa and Asia between 1 and 3 million years ago. This new member of the human family tree, called H. floresiensis and dubbed the “hobbit,” was first reported to the world in Nature Oct. 28, 2004.

The skeleton was initially thought to be about 18,000 years old, with fragmentary remains of other individuals found in older and younger layers thought to have been deposited between 95,000 and 12,000 years ago. The surprisingly recent age for the disappearance of H. floresiensis implied that this diminutive human species had survived on Flores almost 40 millennia after modern humans first passed through this island archipelago, reaching Australia by around 50,000 years ago.

New excavations were carried out at the Indonesian site from 2007 to 2014 by researchers from the Smithsonian Institution in the United States, the National Research Centre for Archaeology in Indonesia and the University of Wollongong in Australia and revealed a stratigraphic sequence far more complex than originally thought. New dates for the site show that all of the skeletal remains of H. floresiensis are between about 100,000 and 60,000 years old, with stone artifacts likely made by this species continuing to about 50,000 years ago. Modern humans were venturing through the islands of Southeast Asia around this time, but whether the two species ever encountered each other on Flores or elsewhere is currently unknown.

H. floresiensis is not the only species that suddenly disappears from the Liang Bua stratigraphic sequence about 50,000 years ago. “Vultures, giant marabou storks, an extinct relative of elephants and even Komodo dragons vanish from the sequence with H. floresiensis,” said co-lead author Matt Tocheri, Human Origins Program research associate at the Smithsonian’s National Museum of Natural History and Canada Research Chair in Human Origins at Lakehead University. “Our new understanding of the last appearance date of H. floresiensis and these associated animals raises new exciting questions. Lots of people may have interesting ideas about why these taxa disappear together 50,000 years ago, but the truth is that we don’t know precisely why—and we won’t know with any certainty until much more work is done at Liang Bua and other sites on Flores.”

Lead author of the study, Thomas Sutikna at the University of Wollongong and National Research Centre for Archaeology, said, “We didn’t realize during our original excavations that the ‘hobbit’ deposits near the eastern wall of the cave were similar in age to those near the cave center, which we had dated to about 74,000 years ago. As we extended our original excavations each year, it became increasingly clear that there was a large remnant pedestal of older deposits truncated by an erosional surface that sloped steeply toward the cave mouth.”

This erosional surface was later covered by much younger sediments during the past 20,000 years. “Unfortunately, the ages of these overlying sediments were originally thought to apply to the ‘hobbit’ remains, but our continuing excavations and analyses revealed that this was not the case,” said co-author Wahyu Saptomo, head of conservation and archaeometry at the National Research Centre for Archaeology.

Professor Richard “Bert” Roberts, Australian Research Council Laureate Fellow at the University of Wollongong, oversaw the various dating analyses used in the study. “We dated charcoal, sediments, flowstones, volcanic ash and even the H. floresiensis bones themselves using the most up-to-date scientific methods available. In the last decade, we’ve vastly improved our understanding of when the deposits accumulated in Liang Bua, and what this means for the age of ‘hobbit’ bones and stone tools. But whether ‘hobbits’ encountered modern humans or other groups of humans—such as the ‘Denisovans’—dispersing through Southeast Asia remains an open and intriguing question.”

The research was supported by the Peter Buck Fund for Human Origins Research, the Smithsonian Scholarly Studies Program, Australian Research Council grants and fellowships and the Waitt Foundation/National Geographic Society. Additional support was provided by the Smithsonian’s Human Origins Program, the University of Wollongong, the Victoria University of Wellington and the Villum Foundation.