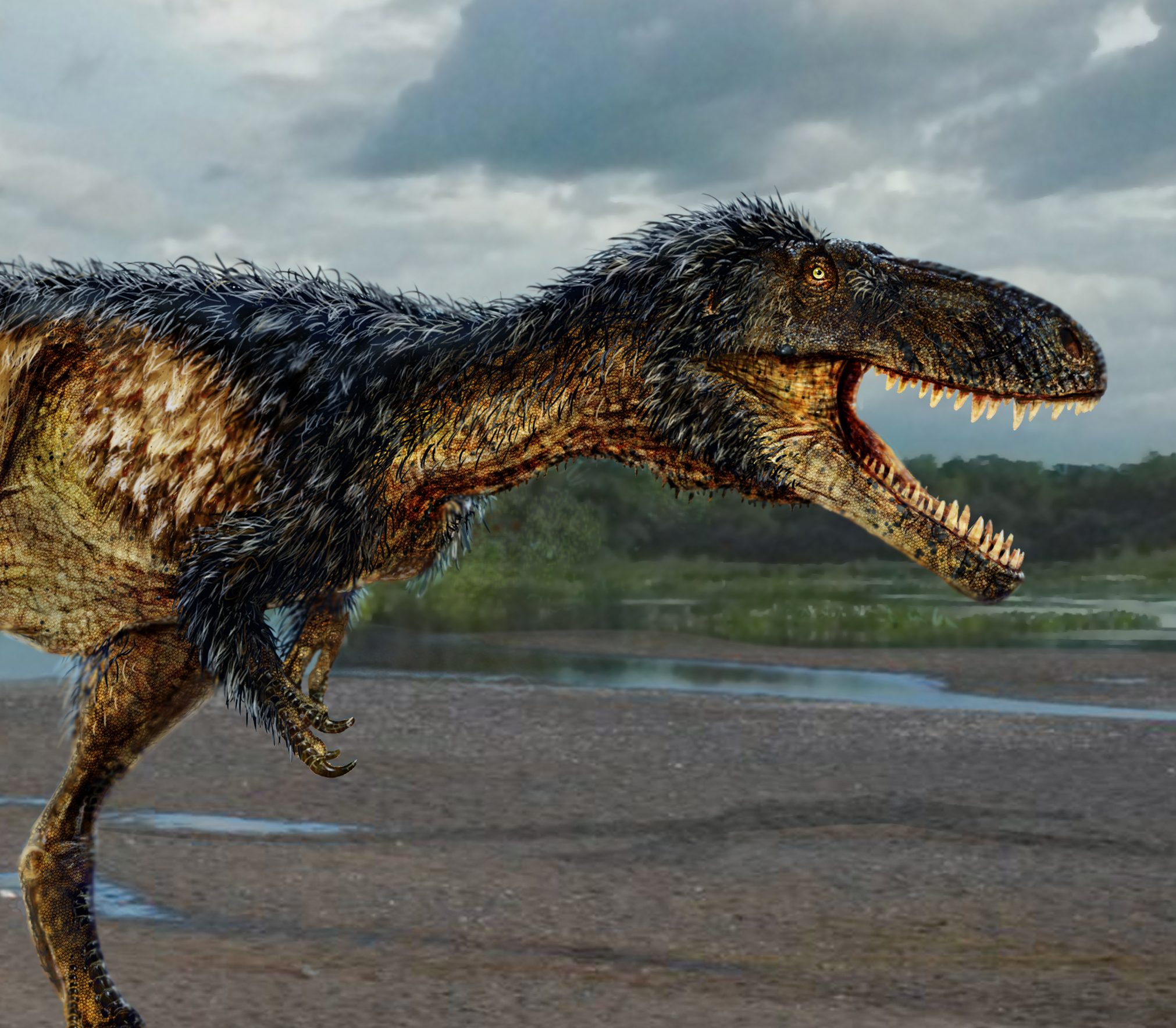 The fossilized remains of a new horse-sized dinosaur reveal how Tyrannosaurus rex and its close relatives became top predators, according to a new study published in the Proceedings of the National Academy of Sciences.

Paleontologists have long known from the fossil record that the family of dinosaurs at the center of the study—tyrannosaurs—transitioned from small-bodied species to fearsome giants like the T. rex over the course of 70 million years. But now, newly discovered dinosaur fossils suggest that much of this transition and growth in size occurred suddenly, toward the end of this 70 million-year period. The study also shows that before the evolution of their massive size, tyrannosaurs had developed keen senses and cognitive abilities, including the ability to hear low-frequency sounds. This positioned them to take advantage of opportunities to reach the top of their food chain in the Late Cretaceous Period after other groups of large meat-eating dinosaurs had gone extinct about 80–90 million years ago.

Until now, little was known about how tyrannosaurs became the giant, intelligent predators that dominated the landscape about 70 to 80 million years ago. The newly discovered species, named Timurlengia euotica, lived about 90 million years ago and fills a 20 million-year gap in the fossil record of tyrannosaurs. The new species is a tyrannosaur but not the ancestor of the T. rex.

“Timurlengia was a nimble pursuit hunter with slender, blade-like teeth suitable for slicing through meat,” said Hans Sues, chair of the Department of Paleobiology at the Smithsonian’s National Museum of Natural History. “It probably preyed on the various large plant-eaters, especially early duck-billed dinosaurs, which shared its world. Clues from the life of Timurlengia allow us to fill in gaps and better understand the life and evolution of other related dinosaurs, like T. rex.”

Sues and Alexander Averianov, a senior scientist at the Russian Academy of Sciences, collected the fossils at the center of the study between 1997 and 2006 while co-leading international expeditions to the Kyzylkum Desert of Uzbekistan.

“Central Asia was the place where many of the familiar groups of Cretaceous dinosaurs had their roots,” Sues said. “The discoveries from the Kyzylkum Desert of Uzbekistan are now helping us to trace the early history of these animals, many of which later flourished in our own backyard in North America.”

Sues and a team of paleontologists led by Steve Brusatte at the University of Edinburgh studied tyrannosaur fossils collected from the international expedition and discovered the new species. The team later reconstructed the brain of the dinosaur using CT scans of its brain case to glean insights into the new species’ advanced senses.

“The ancestors of T. rex would have looked a whole lot like Timurlengia, a horse-sized hunter with a big brain and keen hearing that would put us to shame,” Brusatte said. “Only after these ancestral tyrannosaurs evolved their clever brains and sharp senses did they grow into the colossal sizes of T. rex. Tyrannosaurs had to get smart before they got big.”

The species’ skull was much smaller than that of T. rex. However, key features of Timurlengia’s skull reveal that its brain and senses were already highly developed, the team says.

Timurlengia was about the size of a horse and could weigh up to 600 pounds. It had long legs and was likely a fast runner.

The first tyrannosaurs lived during the Jurassic Period, around 170 million years ago, and were only slightly larger than a human. However, by the Late Cretaceous Period—around 100 million years later—tyrannosaurs had evolved into animals like T. rex, which could weigh up to 7 tons.

The new species’ small size some 80 million years after tyrannosaurs first appeared in the fossil record indicates that its huge size developed only toward the end of the group’s long evolutionary history.

The new study was funded by the European Commission. The fieldwork was supported by the National Science Foundation and the National Geographic Society. The work was carried out in collaboration with researchers at the University of Edinburgh, Russian Academy of Sciences and Saint Petersburg State University.