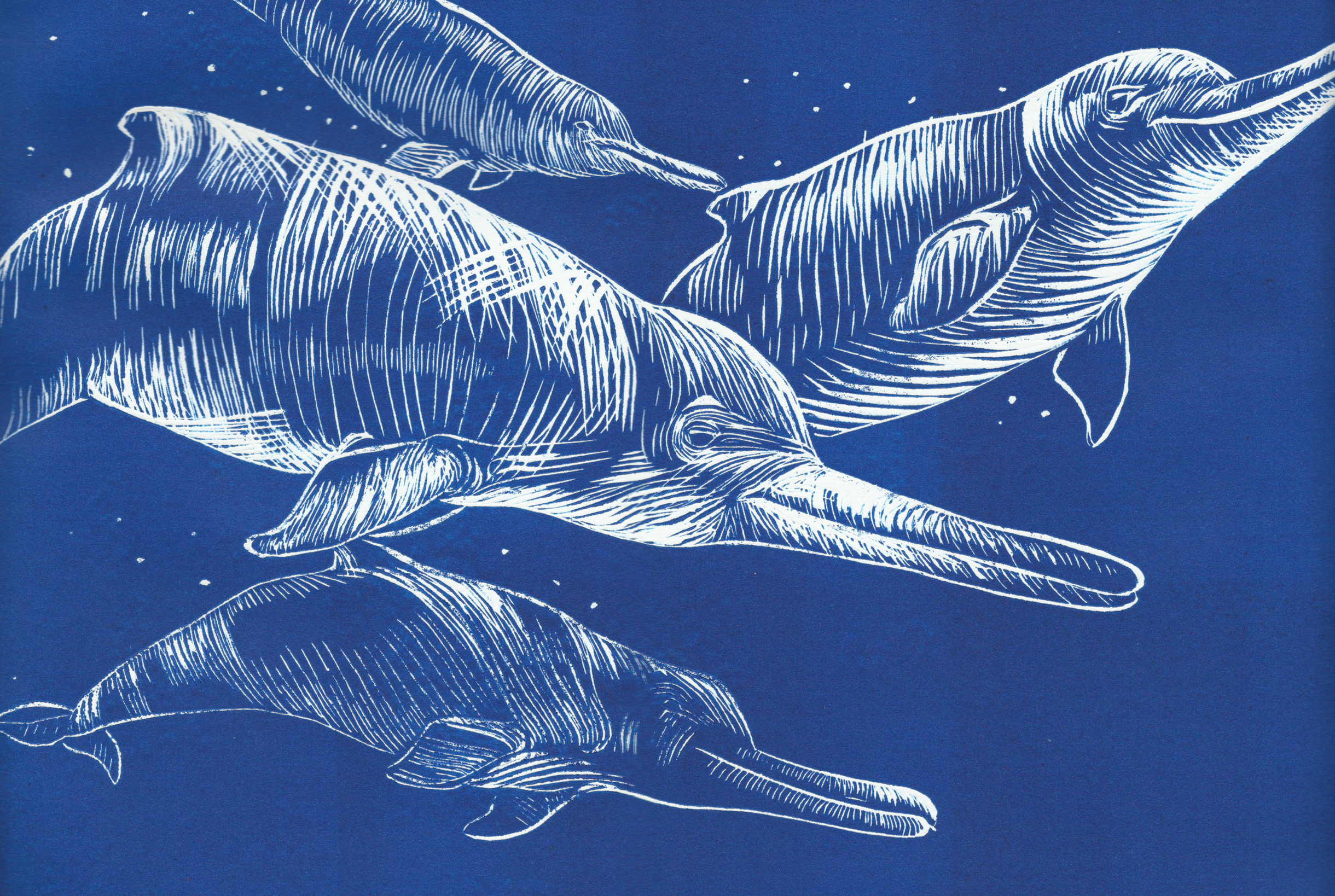 A fossil that has been in the collection of the Smithsonian’s National Museum of Natural History since it was discovered in 1951 is today helping scientists piece together the evolutionary history of whales and dolphins, including the origins of the endangered South Asian river dolphin.

According to Nicholas D. Pyenson, the museum’s curator of fossil marine mammals, and Alexandra Boersma, a researcher in his lab, the fossil belonged to a dolphin that swam in subarctic marine waters around 25 million years ago. It represents a new genus and species, which Pyenson and Boersma have named Arktocara yakataga.

The researchers reported their findings Aug. 16 in the journal PeerJ. They have also produced a digital three-dimensional model of the fossil that can be explored at http://3d.si.edu/model/usnm214830.

The fossil, a partial skull about 9 inches long, was discovered in southeastern Alaska by Donald J. Miller, a geologist with the United States Geological Survey. It then spent decades in the Smithsonian’s collection. With more than 40 million specimens in the museum’s Department of Paleobiology, “We are always learning new things about the vast legacy built by our predecessors at the museum,” Pyenson said. But earlier this year, he and Boersma were captivated by and focused their attention on what Boersma calls “this beautiful little skull from Alaska.”

By studying the skull and comparing it to those of other dolphins, both living and extinct, Boersma determined that A. yakataga is a relative of the South Asian river dolphin Platanista, which is the sole surviving species of a once large and diverse group of dolphins. The skull, which is among the oldest fossils ever found from that group, called Platanistoidea, confirms that Platanista belongs to one of the oldest lineages of toothed whales still alive today.

The South Asian river dolphin—a species that includes both the Ganges river dolphin and the Indus river dolphin—is of great interest to scientists. It is an unusual creature that swims on its side, cannot see and uses echolocation to navigate murky rivers in Nepal, India, Bangladesh and Pakistan. Unlike its known ancestors, it lives only in fresh water. But human activities, including the use of fishing nets, pollution and disruption of its habitat, have decimated the species to only a few thousand remaining individuals. The group’s endangered status makes the dolphins difficult to study.

“One of the most useful ways we can study Platanista is by studying its evolutionary history, by looking at fossils that are related to it to try to get a better sense of where it’s coming from,” Boersma said. “Exactly how that once diverse and globally widespread group dwindled down to a single species in Southeast Asia is still somewhat a mystery, but every little piece that we can slot into the story helps.”

Based on the age of nearby rocks, the scientists estimate that the Arktocara fossil comes from the late Oligocene epoch, around the time ancient whales diversified into two groups—baleen whales (mysticetes) and toothed whales (odontocetes).

“It’s the beginning of the lineages that lead toward the whales that we see today,” Boersma said. “Knowing more about this fossil means that we know more about how that divergence happened.”

Fossils from Platanista’s now extinct relatives have been found in marine deposits around the world, but the Arktocara fossil is the northernmost find to date. The name of the new species highlights its northern habitat: Arktocara is derived from the Latin for “the face of the north,” while yakataga is the indigenous Tlingit people’s name for the region where the fossil was found.

“Considering the only living dolphin in this group is restricted to freshwater systems in Southeast Asia, to find a relative that was all the way up in Alaska 25 million years ago was kind of mind-boggling,” Boersma said.

Pyenson notes that some conservation biologists argue that the South Asian river dolphin should be prioritized for protection to preserve its evolutionary heritage. “Some species are literally the last of a very long lineage,” he said. “If you care about evolution, that is one basis for saying we ought to care more about the fate of Platanista.”

The Smithsonian’s National Museum of Natural History welcomed approximately 7 million visitors in 2015, making it one of the most-visited museums in the world. Opened in 1910, the museum on the National Mall is dedicated to maintaining and preserving the world’s most extensive collection of natural history specimens and human artifacts. The museum connects people everywhere to Earth’s unfolding story. The museum’s researchers, scientific collections, free exhibitions and educational programs address fundamental questions, spark curiosity and illuminate the beauty and wonder of the planet. The museum is open daily from 10 a.m. to 5:30 p.m. (closed Dec. 25). Admission is free. For more information, visit the museum on its website and on Facebook and Twitter.

Boersma and Pyenson (2016). Arktocara yakataga, a new fossil odontocete (Mammalia, Cetacea) from the Oligocene of Alaska and the antiquity of Platanistoidea. PeerJ. 4:e2321; DOI 10.7717/peerj.2321