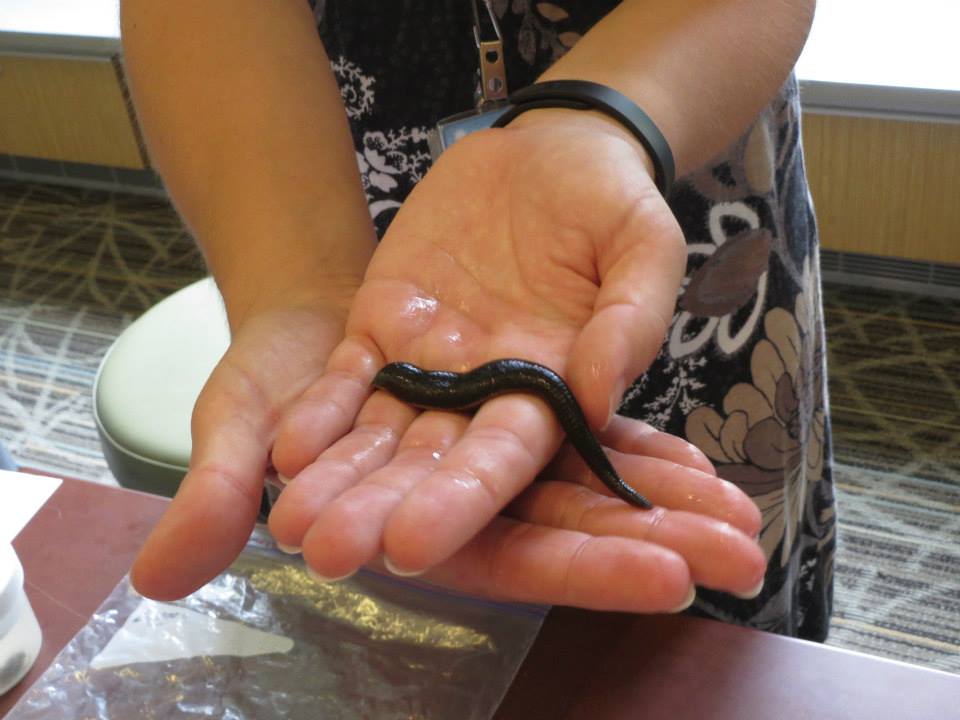 Freshwater wetlands from Georgia to New York are home to a previously unrecognized species of medicinal leech, according to scientists at the Smithsonian’s National Museum of National History. The new species, named Macrobdella mimicus, was first identified from specimens collected in southern Maryland, prompting a search through marshes and museum collections that ultimately revealed that the leech has long occupied a range that stretches throughout the Piedmont region of the eastern United States, between the Appalachian Mountains and the Atlantic Coast.

An international team of museum scientists led by Anna Phillips, the museum’s curator of  parasitic worms, describe the new species in the Aug. 15 issue of the Journal of Parasitology.

“We found a new species of medicinal leech less than 50 miles from the National Museum of Natural History—one of the world’s largest libraries of biodiversity,” Phillips said. “A discovery like this makes clear just how much diversity is out there remaining to be discovered and documented, even right under scientists’ noses.”

Leeches are parasitic worms, many of which feed on the blood of their hosts. In the 1700s and 1800s, physicians used leeches to treat a wide range of ailments, believing that by ridding a patient’s body of bad blood, the parasites could cure headaches, fevers and other conditions. Any leech that readily feeds on humans is considered a medicinal leech, although in North America most leeches used for bloodletting were imported from Europe, leaving native species relatively undisturbed.

Phillips and her colleagues have been exploring the diversity of medicinal leeches in North America for years. When she returned to the museum from a 2015 field expedition with several orange-spotted, olive-green leech specimens she had collected from a Maryland swamp, she and her team assumed they belonged to a familiar species called M. decora, a leech that is thought to live throughout a large swath of the northern United States. But DNA sequencing revealed otherwise.

Examining the specimens’ genomes at key regions used for species identification, Ricardo Salas-Montiel, a graduate student at the National Autonomous University of Mexico, found significant differences from the DNA of M. decora. The molecular discrepancy was surprising, but when the scientists took a closer look at the newly collected leeches, they found a physical difference that distinguished them from M. decora, as well. Like M. decora, the new leeches have multiple reproductive pores along the bottom of their bodies, known as gonopores and accessory pores. In the new leeches, the gonorpores and accessory pores were located in a different position relative to each other.

A subsequent field outing led to the team finding more leeches from South Carolina that shared the same accessory pore positioning. “Then we sequenced [their DNA], and they all came out more closely related to the leeches we had found in Maryland than to anything else known to science,” Phillips said.

Phillips quickly retrieved dozens of North American leeches stored in the Smithsonian’s parasite collection and examined their accessory pores. “All of a sudden, I started finding these things everywhere,” she said. Leeches with the unique pore positioning had been found in locations from northern Georgia to Long Island and preserved in the museum’s collection for years. The oldest, Phillips said, dated back to 1937.

From there, Phillips expanded her search, scouring parasite collections at the North Carolina Museum of Natural Sciences and the Virginia Museum of Natural History, pinpointing additional places where the leech had been found in the past. She and her team also found fresh specimens in Georgia and North Carolina and used DNA sequencing to confirm their close relationship to the others.

Each specimen added to the team’s understanding of the leech’s history in the region and its geographical range. Their molecular, geographical and morphological data suggest the M. mimicus occupies a sliver of the eastern United States that is nestled between the ranges of two other medicinal leech species, Phillips said. The historical record from the museums’ collections, with specimens spanning 63 years, adds another critical layer of information, confirming that the species was not recently introduced to the area and does not represent a newly evolved species. “It’s been here this whole time,” she said. “We just hadn’t looked at it in this new way.”

Funding for this research was provided by the Smithsonian, the National Autonomous University of Mexico, the Natural Sciences and Engineering Research Council of Canada, the Royal Ontario Museum and the Olle Engkvist Byggmästare Foundation in Sweden.