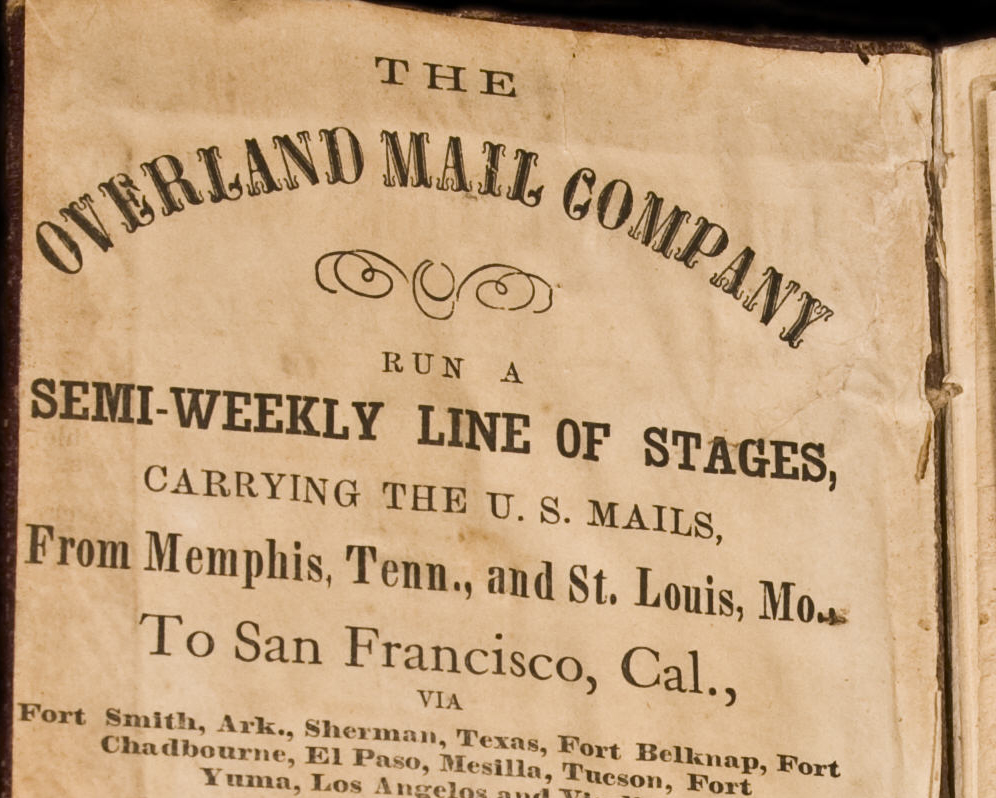 The Smithsonian’s National Postal Museum will host the 15th Maynard Sundman Lecture Wednesday, Oct. 10, from noon to 1 p.m. in the museum’s Discovery Center. Admission is free, with no reservation required. Glen Sample Ely, author of The Texas Frontier and the Butterfield Overland Mail, 1858–1861, will discuss the nation’s first transcontinental mail service from St. Louis to San Francisco. A book signing will take place immediately following the lecture.

In 1857, the U.S. Postmaster General awarded a $600,000 annual contract to the Overland Mail Co. to build the 19th-century equivalent of the modern interstate highway system, stimulating passenger traffic, commercial freighting and business. Company president John Butterfield was the namesake of this 2,800-mile mail route, which became known as the Butterfield Overland Mail Road. Many of the people living and working on the frontier during this period had connections to the mail line, and the U.S. Post Office had a large economic impact on the region.

Ely spent a quarter-century documenting 740 miles of this famous mail route from the Red River to El Paso, Texas. His presentation will not only feature fascinating little-known postal history, but will also take the audience on a journey aboard a Butterfield stagecoach for a firsthand look at America’s rowdy frontier and those who shaped it.

“Everyone is aware of the legendary accomplishments of the Pony Express, but two-and-a-half years earlier, from 1858 to 1861, the underappreciated Butterfield Overland Mail Route played a critical role in transporting mail, supplies and new settlers to remote places in the vast American West,” said Calvin Mitchell, assistant curator at the museum. “Dr. Ely’s lecture will address the significant contributions this route made to the development of the American West.”

Ely is a Texas historian and documentary producer. He earned his Ph.D. in history from Texas Christian University. Ely’s work has won The Award of Excellence in Preserving History from the Texas Historical Commission as well as Gold and Silver Wilder Awards from the Texas Association of Museums. His first book, Where the West Begins: Debating Texas Identity, was published by Texas Tech University Press in 2011. His latest book, The Texas Frontier and the Butterfield Overland Mail, 1858–1861, published by University of Oklahoma Press in 2016, has won 12 awards and honors. Earlier this year, he was inducted as a Fellow to the Texas State Historical Association in recognition of his “distinguished published works” and “exemplary scholarly activity.”

As a complement to the lecture, the museum will display an 1859 employee notebook issued by the Butterfield Overland Mail Co. The notebook contains a foldout map, instructions to employees regarding personal behavior and a travel schedule.

The National Postal Museum’s Maynard Sundman Lecture Series was established in 2002 through a donation by Sundman’s sons, David and Donald. The Sundman lectures feature talks by authors and expert philatelists on stamps and stamp collecting.