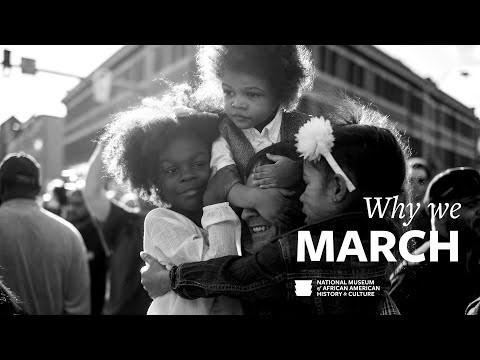 More than 200,000 people gathered on the National Mall to March for Jobs and Freedom Aug. 28, 1963. This month, more than 50 years later, the Smithsonian’s National Museum of African American History and Culture will commemorate the March on Washington with a digital resource webpage exploring the historical significance of the march with collection objects, stories, videos and content related to the historic march. This page will include voices of A. Phillip Randolph, Rep. John Lewis and many unsung activists and a performance by singer Marian Anderson. The resource webpage is available at nmaahc.si.edu/marchonwashington.

To mark the anniversary day (Aug. 28), the museum will also make available the film commissioned for its grand opening by Ava Duvernay, August 28: A Day in the Life of a People. The film will be available to view on the museum’s homepage and YouTube channel starting at 10 a.m. for 24 hours.

“This Friday marks the 57th anniversary of the March on Washington, which in 1963, brought together more than a quarter-million people advocating for racial justice,” said Spencer Crew, acting director of National Museum of African American History and Culture. “Demonstrations have long been a way for American citizens to help the nation live up to its stated ideals, making Friday’s anniversary and march not just a commemoration, but the continuation of an American tradition that began centuries ago. Evidence of not only how far we have come since 1963, but the long journey ahead to justice and equality.”

Why we march… is a three-minute video exploring the role of marching in social justice reform. The video uses photography from the museum’s collection to illustrate more than 50 years of community activism and protest movements for racial and social justice and equity in the United States to begin to answer the question, why we march. Visit @NMAAHC’s YouTube channel or the March on Washington webpage to see the video.

This series will feature two rare films from the museum’s collection, The Black Woman and Alice Coltrane, from the seminal program Black Journal (1960–1970). Alice Coltrane is an intimate visit with musician Alice Coltrane at her home. The Black Woman focuses on—in the words of Black Journal host Tony Brown—one of the greatest institutions in the world: “The Black woman.” Curator of photography and film Rhea Combs will introduce the movie, followed by a discussion with scholar Philana Payton and journalist Joan Harris, who was interviewed in The Black Woman. Co-presented with Screen Slate, the films will be available for viewing at www.twitch.tv/screenslate.

In a digital collaboration with National Geographic, the National Museum of African American History and Culture will “takeover” National Geographic’s Instagram page (@NatGeo). Through their account, NMAAHC’s curator Damion Thomas will examine the 1963 March on Washington ahead of the upcoming National Action Network’s Commitment March.

August 28: A Day in the Life of a People, Available Publicly for 24 Hours

Since opening Sept. 24, 2016, the National Museum of African American History and Culture has welcomed more than 7 million visitors. Occupying a prominent location next to the Washington Monument on the National Mall in Washington, D.C., the nearly 400,000square-foot museum is the nation’s largest and most comprehensive cultural destination devoted exclusively to exploring, documenting and showcasing the African American story and its impact on American and world history. For more information about the museum, visit nmaahc.si.edu, follow @NMAAHC on Twitter, Facebook, and Instagram or call Smithsonian information at (202) 633-1000.