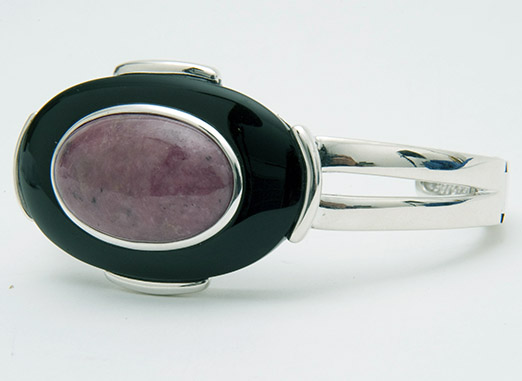 Jewelry based on the gems and minerals in the Smithsonian’s National Museum of Natural History’s National Gem Collection is scheduled to premiere on QVC Tuesday, Sept. 14, from 7 to 9 p.m. (EDT). This is the first time the Smithsonian has offered licensed products through a multimedia retailer.

Gemologist Christine Webb (a 13-year veteran of the gems and minerals department in the museum) is scheduled to appear during the broadcast to present a range of jewelry designed exclusively for QVC. The museum’s collection of 10,000 gems and 350,000 minerals served as the inspiration for the Smithsonian jewelry line. The distinct pieces, including rings, necklaces, bracelets, earrings and pendants, which were created from carefully selected gemstones, sterling silver and 14-karat gold, will be priced from $65 to $950.

The jewelry line features a ring made with Smithsonite, a mineral named after the Institution’s founder James Smithson (1754-1829); a sterling, turquoise and white topaz ring and earrings inspired by jewelry given to Empress Marie-Louise from Napoleon; and a turquoise pendant with a stone mined from Bisbee, Ariz. One of the special pieces offered that night is a limited-edition heart-shaped sterling blue topaz ring by jewelry designer Judith Ripka as a tribute to the 100th anniversary of the cutting of the Blue Heart diamond.

The two-hour program, Smithsonian Institution: National Gem Gallery, will feature behind-the-scenes footage of the museum’s gem and mineral halls, interviews with Jeffrey Post, curator of the National Gem and Mineral Collection, and rarely seen shots from inside the vault, which houses many of the rare gems not on display.

“For our inaugural program with QVC, we wanted to introduce the audience to the range of gems found in the Smithsonian’s National Gem Collection as well as offer a rare glimpse of some of the interesting pieces housed in our vault,” said Carol LeBlanc, director, consumer products, Smithsonian Enterprises.

“Every piece was inspired by something in the collection,” LeBlanc added, “whether it was the design, style, gemstone or color. The goal is to use the treasures in the Institution as design inspiration for a modern jewelry line.”

“Wearable jewelry inspired by the National Gem and Mineral Collection is now available for those who would like to celebrate America’s treasures,” said Diane Paccione, vice president of merchandising for QVC. “We are thrilled to share these exceptional pieces and the stories behind them with our customers.”

The next Smithsonian program on QVC is scheduled for early December and will focus on some of the more iconic pieces of jewelry found in the collection, such as Marie Antoinette’s earrings, the Napoleon necklace and the Hope diamond. This two-hour show is scheduled to be broadcast live from the Smithsonian Castle.

“The Smithsonian’s National Gem Collection is one of the largest and finest in the world,” said Post. “It is because of the generosity of our donors that we have been able to build such an extraordinary collection that continually gives us new scientific insights through our research and that we take pride in putting on display to share with the American public.”

Additional information regarding the history of the original objects, the Smithsonian’s National Gem Gallery and the gemstones themselves will be available online at www.QVC.com.

QVC Inc., a wholly owned subsidiary of Liberty Media Corporation attributed to the Liberty Interactive Group, is one of the largest multimedia retailers in the world. QVC is committed to providing its customers with thousands of the most innovative and contemporary beauty, fashion, jewelry and home products. Its programming is distributed to more than 180 million homes worldwide. The company’s website, QVC.com, is ranked among the top general merchant Internet sites. QVC is based in West Chester, Pa., with operations in the United Kingdom, Germany and Japan, and launching in Italy later this year. QVC, Q and the Q Ribbon Logo are registered service marks of ER Marks Inc.