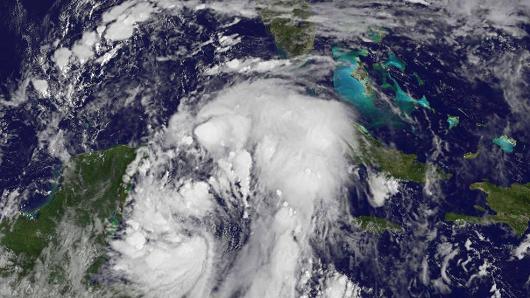 A hurricane can cause substantial damage to tropical marine ecosystems, especially if the ecosystems have already been degraded by human activity. A team of Smithsonian scientists has found that one specific activity—overfishing—is especially critical. In experiments at the Smithsonian Tropical Research Institute in Panama, the team found that removing large reef fish might change the types of marine species that populate coastal ecosystems, making them more vulnerable to storms.

“Extreme storms have devastating impacts on people, as we’ve unfortunately seen recently,” said Laura Jurgens, a postdoctoral researcher at the Smithsonian and Temple University. “More than three billion people rely on coastal marine ecosystems for their food and livelihoods. In the long run, human resilience to extreme events like hurricanes is closely linked to ecological resilience, especially after the immediate safety and recovery concerns have passed.”

In underwater habitats, Jurgens and colleagues grew communities of coastal marine invertebrates, with some inside cages that kept pufferfish and other reef fish out. In the laboratory, they then simulated the massive influxes of freshwater associated with hurricane rainfall in coastal habitats. This caused a system shock to the saltwater-accustomed oysters, barnacles, sea squirts and other organisms that form a base of the food web for fishes and other larger marine animals.

But the groups that were protected from fish when they established suffered more than 50 percent loss of biomass. By comparison, communities that were exposed to fish during development showed little effect of the blast of fresh water. The researchers say this was because a dominant competitor in these communities — an invasive sea squirt — was able to greatly expand its presence when there were no predators, and that species made the communities more vulnerable to the experimental storm. The study was published Oct. 31 in Ecosphere.

“Removing predators from a system changes the way the table is set,” Jurgens said. “Then an extreme event comes along and yanks out the tablecloth, and the level of destruction you get depends on what you had on the table to start with. In this case, the communities without predators lost about half their biomass, and that’s like removing half the trees in a forest.”

Jurgens and STRI staff scientist Mark Torchin, a co-author on the study, say the research sheds new light on the resilience of tropical marine ecosystems in an age of global change, which scientists believe includes the increased intensity of tropical storms and hurricanes. It also adds to the body of research that shows how apex predators like reef fish are critical to the overall health of coastal environments.

“We know little about how marine communities will respond in a rapidly changing world,” Torchin said. “This gets us closer to understanding the potentially interactive effects of predator loss, invasive species and extreme storm events in the sea. This is another example of how we can use long-term data collected to inform current research projects. In this case, historical salinity data collected over almost 50 years by the Smithsonian in Panama enabled us to parameterize our experiments.”