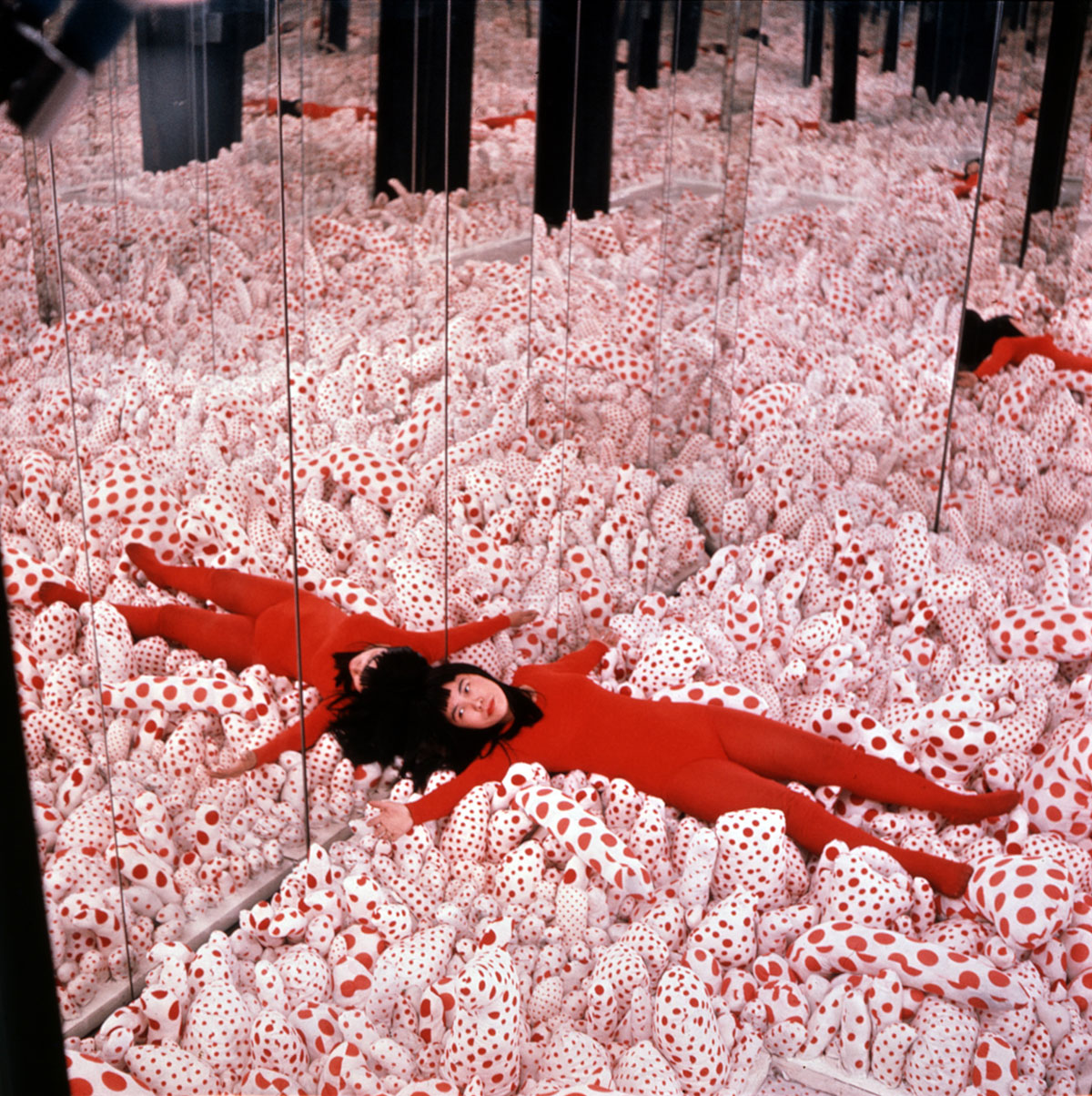 The Smithsonian’s Hirshhorn Museum and Sculpture Garden announces “One with Eternity: Yayoi Kusama in the Hirshhorn Collection,” on view April 4 to Sept. 19. The exhibition debuts the museum’s new acquisitions by the Japanese artist Yayoi Kusama, including two of her renowned Infinity Mirrored Rooms. Building on the legacy of the museum’s 2017 blockbuster survey “Yayoi Kusama: Infinity Mirrors,” the forthcoming exhibition cements the enduring art-historical connection between the visionary artist and the Smithsonian’s national museum of modern art on the National Mall.

The exhibition illuminates Kusama’s seven-decade practice in the context of the museum’s recent acquisitions to the permanent collection, including two of her transcendent Infinity Mirrored Rooms and sculptures, including “Pumpkin” (2016) and “Flowers¾Overcoat” (1964), an early painting and photographs of the artist. The Hirshhorn’s 2017 survey traveled to five North American art museums, introducing Kusama’s spellbinding visions to record audiences. Betsy Johnson, assistant curator at the museum, has organized “One with Eternity: Yayoi Kusama in the Hirshhorn Collection,” which will also consider the broader context of the artist’s life and practice.

“After a career spanning almost 80 years, Yayoi Kusama is one of the most influential working artists in the world,” said Hirshhorn Director Melissa Chiu. “Her artwork is inextricably linked with our museum’s history and mission: to present the most exciting art and artists of our time. This exhibition extends the impact of our 2017 Kusama survey and its blockbuster tour on our curatorial history. Acquiring two physically immersive Infinity Mirrored Rooms—her first and one of her most recent—positions the Hirshhorn as a permanent resource for art lovers and scholars to experience and study Kusama’s sublime practice.”

Among the new additions to the Hirshhorn’s permanent collection is the artist’s milestone immersive installation “Infinity Mirror Room—Phalli’s Field (Floor Show)” (1965/2017). The exhibition will also introduce one of Kusama’s most recent rooms, to be announced in early 2020.

The Hirshhorn Museum and Sculpture Garden welcomed almost 160,000 visitors to “Yayoi Kusama: Infinity Mirrors” between Feb. 23 and May 14, 2017, and a record 475,000 visitors to its building and sculpture garden during the same period—its highest spring visitation since the museum’s opening in 1974, doubling its attendance that year to 1.2 million. The touring exhibition welcomed more than 800,000 visitors to partner museums across the U.S. and Canada during the next two years. Additional records set by “Yayoi Kusama: Infinity Mirrors” include:

For more information on the Hirshhorn’s presentation of “One with Eternity: Yayoi Kusama in the Hirshhorn Collection” and #EternalKusama, visit: https://hirshhorn.si.edu/news/announcement/yayoi-kusama-2020/.

Kusama (b. 1929, Matsumoto, Nagano, Japan) continues to produce paintings at her studio in Tokyo. She studied traditional Nihonga (Japanese-style) painting in Kyoto before moving to New York City in 1958. There she was active in avant-garde circles during the formative years of Pop art and Minimalism, exhibiting her work alongside such artists as Andy Warhol, Claes Oldenburg and Allan Kaprow—all of whom cited Kusama as influential to the development of Assemblage art, environmental art and performative practices.

Kusama exhibited widely in Italy, Germany and the Netherlands in the mid-1960s, participating in exhibitions with artists associated with the Nul, Zero and New Tendency movements in Europe and beginning to develop her interest in optics and interactive elements such as mirrors, electric lights, sound and kinetics.

Kusama’s fame grew in the late ’60s through her radical antiwar “Happenings,” which featured nudity and polka dots in the streets of New York. Kusama returned to Japan in 1973, where she has since resided. In recent years, Kusama has achieved celebrity status and tremendous critical respect.

The Hirshhorn Museum and Sculpture Garden is the national museum of modern and contemporary art and a leading voice for 21st-century art and culture. Part of the Smithsonian, the Hirshhorn is located prominently on the National Mall in Washington, D.C. Its holdings encompass one of the most important collections of postwar American and European art in the world. The Hirshhorn presents diverse exhibitions and offers an array of public programs on the art of our time—free to all, 364 days a year (closed Dec. 25). For more information, visit hirshhorn.si.edu.