"Hector Guimard: How Paris Got Its Curves" and "Deconstructing Power: W. E. B. Du Bois at the 1900 World's Fair" To Open This Fall at Cooper Hewitt 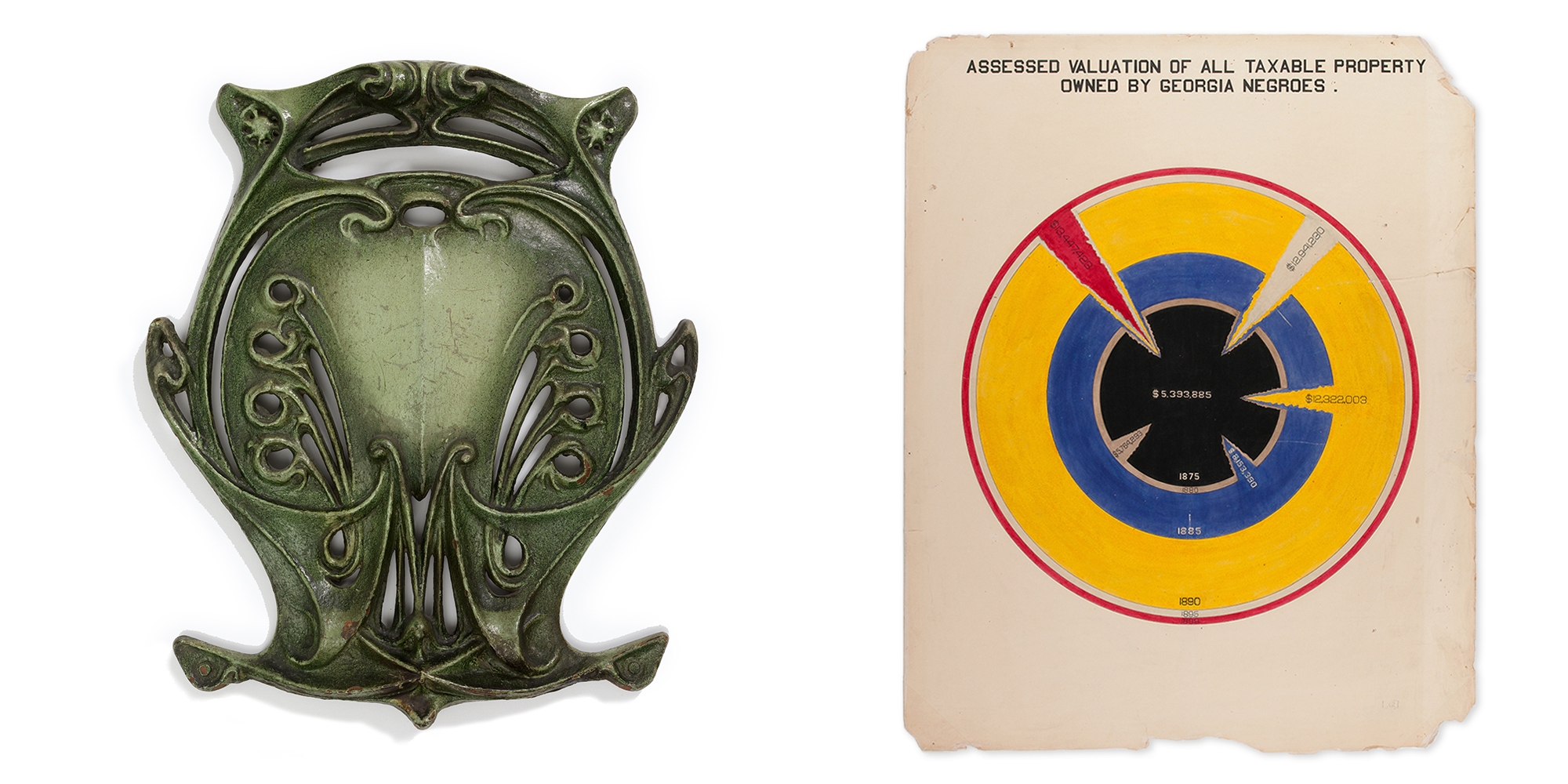 Furniture, metalwork, ceramics, drawings and photographs will transform the second floor of Cooper Hewitt, Smithsonian Design Museum into early 20th century Paris in two parallel and complementary exhibitions, “Hector Guimard: How Paris Got Its Curves,” opening Nov. 18, and “Deconstructing Power: W. E. B. Du Bois at the 1900 World’s Fair,” opening Dec. 9. Presented side by side, these exhibitions examine the historical significance and contemporary resonance of Hector Guimard’s work, alongside the creativity and innovation on display at the 1900 Paris World’s Fair, including a selection of groundbreaking data visualizations by W. E. B. Du Bois, one of the first Black Americans to ever participate in a European World’s Fair. On loan from the Library of Congress, it will be the first time that Du Bois’ work has traveled since 1901.

“These significant exhibitions continue Cooper Hewitt’s work to recontextualize and reframe key voices that both shaped or were left out of our known narratives of design history,” said Maria Nicanor, director of the museum. “It was very important to us that these two exhibitions be presented together, to provide visitors the context to both admire the visual beauty and understand the historical complexities of the objects on display. I’m particularly excited to have W. E. B. Du Bois’ powerful work on view. The presentation of his work, as well as Guimard’s, clearly illustrate that design is not—nor has ever been—neutral.”

Co-organized by Cooper Hewitt and the Richard H. Driehaus Museum, Chicago, this exhibition invites a new understanding of France’s most famous Art Nouveau architect, Hector Guimard (1867–1942). Bringing together nearly 100 objects from public and private collections worldwide, the exhibition will provide urban and historical context for the full range of Guimard’s design work.

Guimard is perhaps best known for designing the entrances to the Paris Métro stations and private residences like Castel Béranger. Based in the repeated use of organically curved, undulating lines, these ornate designs anchored his efforts to create an eponymous brand he called Style Guimard. Lesser known are his more pared-down designs for several standardized housing projects from the 1920s, attesting to his socialist and pacificist leanings. Though seemingly opposite in appearance, these later projects were also critical components of the Guimard style.

The exhibition is accompanied by the publication, Hector Guimard: Art Nouveau to Modernism edited by David A. Hanks (Yale University Press in association with the Richard H. Driehaus Museum, 2021).

“Deconstructing Power” places decorative arts from Cooper Hewitt’s permanent collection in dialogue with 20 innovative data visualizations created for the 1900 Paris World’s Fair by W. E. B. Du Bois (1868–1963) to explore how design can both reveal and mask dynamics of power and equity.

Du Bois seized the fair as an opportunity to place a bold narrative of Black American progress on the world stage. For the Exhibit of American Negros, Du Bois and his Atlanta University students made 63 hand-drawn diagrams that used shape, line and color to showcase Black success despite pervasive racism in the United States and the global community. On loan from the Library of Congress, the data visualizations were created on presentation cardboard and conceived for a temporary installation at the fair. Given their fragile nature, the works will be rotated during the course of the exhibition.

“Deconstructing Power” further calls attention to how the progressive image of the fair was inequitable and concealed the power mechanisms of nationalism and imperialism that drove this spectacle of progress. Forty-seven countries participated in the fair, each attempting to demonstrate to a global audience their cultural and economic progress through carefully crafted installations of the latest in art, imported materials and cutting-edge innovations. Among the decorative artwork on display in the exhibition include examples by Sèvres, Louis Comfort Tiffany and Emile Gallé, which illuminate how national styles were crafted while prompting a continued investigation of what and who defines a nation. Works by Carlo Bugatti, Adolf Loos and Henry van de Velde interrogate the imperial fantasies permeating modern design at the turn of the century.

At Cooper Hewitt, “Hector Guimard: How Paris Got Its Curves” was curated by Yao-Fen You, senior curator and head of product design and decorative arts, with Andrea Lacalamita, curatorial fellow, and support from Phoebe Boosalis Moore and Alisa Chiles.

“Deconstructing Power: W. E. B. Du Bois at the 1900 World’s Fair” was curated by Devon Zimmerman, associate curator of modern and contemporary art at the Ogunquit Museum of American Art, in consultation with Lanisa Kitchiner, chief of the African and Middle Eastern Division at the Library of Congress, and with support from Yao-Fen You, senior curator and head of product design and decorative arts at Cooper Hewitt, and Christina De Léon, associate curator of Latino Design at Cooper Hewitt.

“Hector Guimard: How Paris Got Its Curves” is made possible with major support from Denise Littlefield Sobel.

Generous support is provided by The Lemberg Foundation and Marilyn F. Friedman. Support is also provided by the August Heckscher Exhibition Fund, The Felicia Fund, and Margery F. Masinter.

“Deconstructing Power: W. E. B. Du Bois at the 1900 World’s Fair” is made possible with major support from Denise Littlefield Sobel. Additional support is provided by The Felicia Fund and Marilyn F. Friedman.

Cooper Hewitt is America’s design museum. Inclusive, innovative and experimental, the museum’s dynamic exhibitions, education programs, master’s program, publications and online resources inspire, educate and empower people through design. An integral part of the Smithsonian Institution—the world’s largest museum, education and research complex—Cooper Hewitt is located on New York City’s Museum Mile in the historic, landmark Carnegie Mansion. Steward of one of the world’s most diverse and comprehensive design collections—over 215,000 objects that range from an ancient Egyptian faience cup dating to about 1100 BC to contemporary 3D-printed objects and digital code—Cooper Hewitt welcomes everyone to discover the importance of design and its power to change the world. For more information, visit www.cooperhewitt.org or follow @cooperhewitt on Instagram, Facebook, Twitter and YouTube.