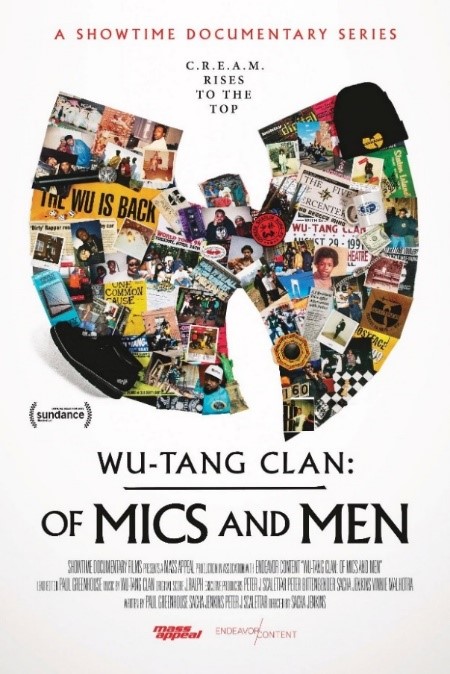 In addition, throughout May and June, the museum will host a variety of programs, including a book discussion and dance party featuring Big Freedia, the celebrated “Queen of Bounce,” and a number of music-oriented programs to celebrate the Smithsonian Year of Music. All programs inside the Oprah Winfrey Theater will stream live on the museum’s Ustream channel at ustream.tv.

May and June Programming
Cinema and Conversation: Wu-Tang Clan: Of Mics and Men
Sunday, May 5; 7:15 p.m.
As Wu-Tang Clan marks the 25th anniversary of their breakout debut album Enter The Wu-Tang (36 Chambers), the documentary series examines the hip-hop group’s cultural history and looks back on their career, combining intimate and reflective interviews from each of the nine living members with never-before-seen archival footage and performances. A post-screening discussion moderated by NPR Music’s Rodney Carmichael featuring RZA, Power, Divine and filmmaker Sacha Jenkins concludes the event. Presented by the museum’s Earl W. and Amanda Stafford Center for African American Media Arts, the Wu-Tang Clan: Of Mics and Men, screening and post discussion will be held in the Oprah Winfrey Theater. Admission is free, but registration is required due to limited seating. Visitors may register at https://nmaahc.si.edu/events/upcoming.

Musical Crossroads: Featuring the U.S. Army Blues Jazz Ensemble
Sunday, May 19; 3 p.m. to 5 p.m.
The U.S. Army Blues Jazz Ensemble, part of the United States Army Band, will offer a concert with guest vocalists Sharón Clark, Michael Croan and U.S. Army Band member Sgt. Major Christal Rheams. The concert will showcase iconic songs, including Nina Simone’s “I Wish I Knew What It Was like to Be Free,” Curtis Mayfield’s “People Get Ready” and Sam Cooke’s “A Change is Gonna Come.” Selections from Oliver Nelson’s “Afro/American Sketches” and “The Kennedy Dream” as well as big band classics from the Count Basie and Sammy Davis Jr. songbooks. During the program, museum curator Krewasky Salter will preview an upcoming exhibition on World War I. Registration is encouraged at https://nmaahc.si.edu/events/upcoming.

Through The African American Lens: Say Amen, Somebody
Thursday, May 23; 7 p.m.
This edition of Through the African American Lens features the U.S. premiere of the newly restored and preserved digital version of the critically acclaimed documentary, Say Amen, Somebody (1983). The film, directed by George Nierenberg, explores the lives and music of the pioneers of modern gospel music and features interviews and performances by some of the most renowned musicians, including Willie Mae Ford Smith and Thomas A. Dorsey. A cast of musicians narrates the story of the development of American gospel music and provides insight on the impact of the music and the church on their lives, their lives, families and community. Of special significance is the late Thomas Dorsey’s detailed recounting of his inspiration for his best-known song, “Take My Hand, Precious Lord.” A post-screening panel will conclude the evening event. Registration is encouraged at https://nmaahc.si.edu/events/upcoming.

Step by Step: The Ruby Bridges Suite
Saturday, June 1; 1 p.m. and 3 p.m.
Darrell Grant’s “Step by Step: The Ruby Bridges Suite” is a musical suite composed of nine musical numbers interspersed with a narrative to tell the story of Ruby Bridges. Bridges is the trailblazing African American girl who, at age 6, integrated the New Orleans Public Schools in 1960. Images of the young girl protected by National Guard as she makes her way to school have become iconic symbols of America’s civil rights era. The museum will host two performances of the suite June 1 at 1 p.m. and 3 p.m. Grant, the suite’s composer, has built an international reputation as a pianist, composer and educator. His awards include induction into the Jazz Society of Oregon Hall of Fame in 2009 and receipt of the 2011 Kamelia Massih Outstanding Faculty Prize in the Arts from Penn State University. He is currently vice president of the board of Chamber Music America. Tickets are available at https://nmaahc.si.edu/events/upcoming.

What’s Your Story? Researching, Writing and Publishing Your Family History
Saturday, June 8; 12 p.m.
Linda Crichlow White, author of Back There, Then: A Historical and Genealogical Memoir will offer examples of how family community history has local, regional, national and international impact on everyday people. White will explain the writing and publishing steps she used and will offer suggestions for others considering producing similar work. To attend, guests should RSVP by emailing familyhistorycenter@si.edu.

NMAAHC Live: Big Freedia!
Saturday, June 22; 7 p.m.
In honor of the 50th anniversary of the Stonewall Rebellion, Big Freedia, the celebrated “Queen of Bounce,” will visit the museum to discuss her life and music through the lens of her autobiography, God Save The Queen. Following the book discussion, Big Freedia will perform and lead a short dance party inside Heritage Hall. Registration is encouraged at https://nmaahc.si.edu/events/upcoming.

A Seat at the Table: The Concept of Well-Being
Friday, June 28; 6:45 p.m.
Panelists will gather to explore ways to maintain a sense of well-being in various incarnations: thankfulness, contentment and fulfillment, during periods of communal and personal upheaval. Invited panelists include HawaH, author, artist and community educator, and Teddy Reeves from the museum’s Center for the Study of African American Religious Life. https://nmaahc.si.edu/events/upcoming

June 2 marks the last day to view the exhibition “Watching Oprah: The Oprah Winfrey Show and American Culture,” where Winfrey and her 25-year daytime talk show are the lens to explore contemporary American history and culture, especially issues of power, gender and the media. “Watching Oprah” is located in the museum’s Special Exhibitions gallery, a 4,300-square-foot exhibition space located on the concourse level near the elevator that takes visitors down to the first-level History Galleries.

Since opening Sept. 24, 2016, the National Museum of African American History and Culture has welcomed more than 5 million visitors. Occupying a prominent location next to the Washington Monument on the National Mall in Washington, D.C., the nearly 400,000-square-foot museum is the nation’s largest and most comprehensive cultural destination devoted exclusively to exploring, documenting and showcasing the African American story and its impact on American and world history. For more information about the museum, visit nmaahc.si.edu, follow @NMAAHC on Twitter, Facebook, Instagram and Snapchat—or call Smithsonian information at (202) 633-1000.