This Dance Is Taken: Hundreds of Male Frog Species Found To Change Colors During Mating Season

Smithsonian Scientist Teams Up With International Collaborators To Understand Why These Male Frogs Are ‘Blushing’ When It Comes to Sex
September 20, 2017
News Release 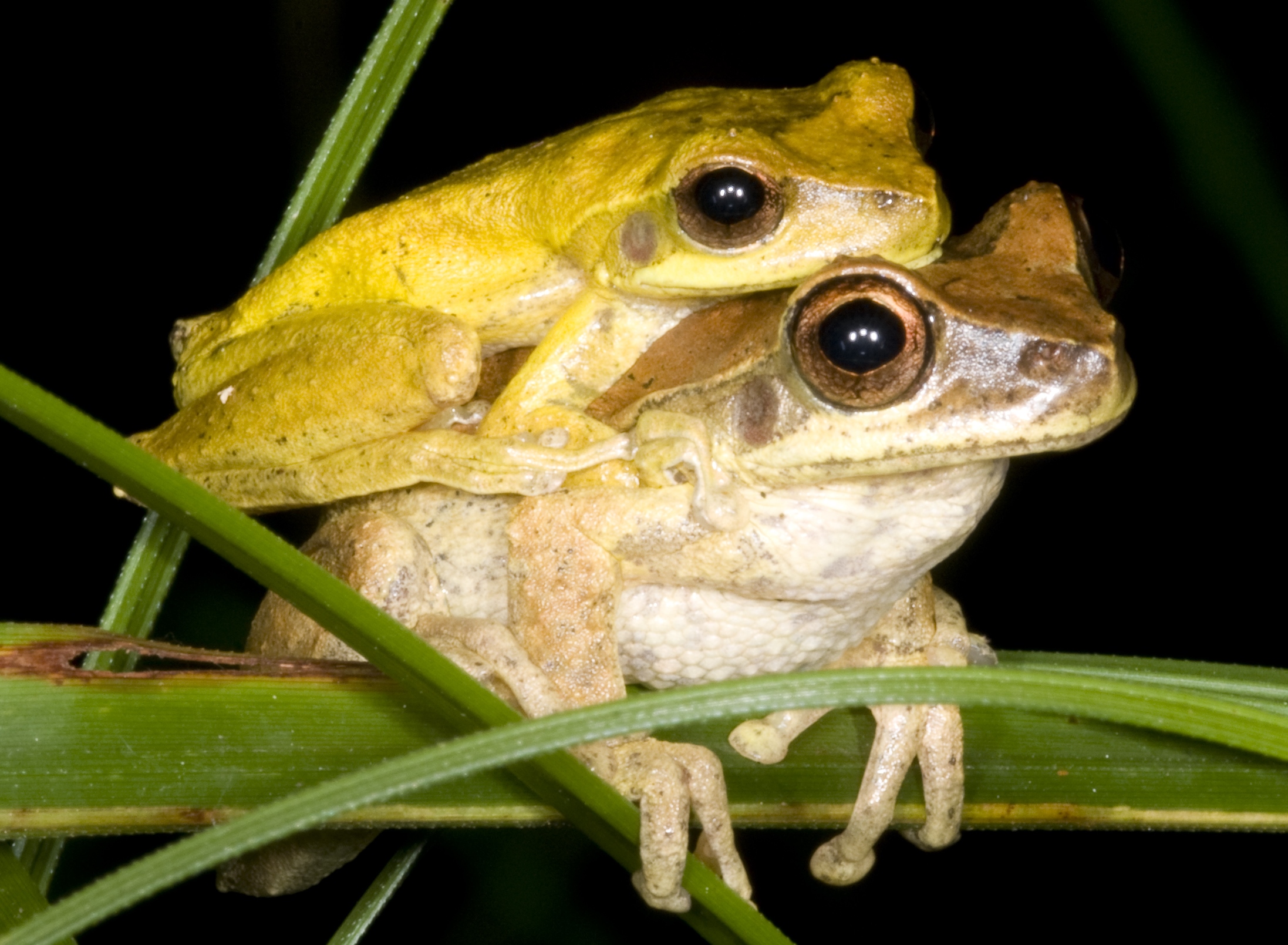 Some of nature’s most vibrant colors occur in frogs, who peek out from rainforests and marshes in startling shades of blue, yellow and red. But for hundreds of species, only males flaunt flashy colors—and sometimes only for a few hours, days or weeks each year.

In the Sept. 20 issue of the Journal of Evolutionary Biology, scientists from the Smithsonian’s National Museum of Natural History and Macquarie University in Australia report that the males of at least 178 species of frogs undergo a temporary color change during their breeding season. These frogs spend most of the year in drabber colors—browns or greens that blend discreetly in with their surroundings—but take on vibrant hues when it is time to mate.

Temporary color changes have been recognized in some frogs, and biologists have been investigating the phenomenon in detail in a handful of species. But since the bright hues do not last long, they can be easy to miss, and no one knew just how many species have males who change color for the breeding season.

Now, after searching for evidence of such a color change in thousands of frog species, Rayna Bell, a research zoologist and curator of amphibians and reptiles at the museum, said the phenomenon is surprisingly widespread: “It’s not just a few species—it’s a lot of frogs all over the world.”

Before now, scientists have mostly been aware of three well-studied examples of frogs switching colors. Bell said she first learned that some male frogs switch colors for the breeding season while exploring male and female color differences across the frog tree of life. The temporary color changes had also caught the attention of Associate Professor Martin Whiting and undergraduate honors student Grant Webster at Macquarie University, who had uncovered many examples of the phenomenon in Australian frogs. After Bell published a review article on the topic, the two Australian scientists contacted her and proposed they work together to broaden the search.

The three scientists teamed up to find as many examples of temporary color changes in male frogs as they could. Some had already been documented, and Webster had noted many in his own field work. But generally, scientists have not paid much attention to the role of color in communication between frogs, focusing instead on their vocal communications, Bell said.

She and her collaborators examined a wide array of frog photos looking for evidence of color change. To evaluate each species, the team compared photos of males engaging in breeding behavior—either actively calling for a mate or in a mating posture with a female—to photos of males outside the breeding season and to females.

The team evaluated 2,146 different frog species and identified 179 whose males temporarily change color when it is time to breed, with most turning a bright yellow. Like the three best-studied species of color-changing frogs, most are species that breed in large, chaotic groups, where the males’ distinct coloration may improve the chances of successful pairings.

The breeding season is often short and frenzied for these frogs, with hundreds of individuals descending on ponds or puddles that may exist only in the days or weeks after a storm to lay their eggs. Amongst the pandemonium, a bright, sex-specific color can signal which frogs are suitable partners.

Bell said research on two color-changing species suggests that the males’ bright color is not about attracting a mate, but acts instead as a signal to other males. “It’s useful to communicate ‘I’m a male, and I’ve got my female—stay away from her,’ or ‘I’m another male, don’t grab onto me,’” she said. “It’s an innovative evolutionary solution to one of the many challenges associated with reproducing successfully.”

Now that Bell and her colleagues have documented hundreds of examples of color-changing frogs, much work remains to determine exactly how and why males take on their temporary hues. Bell plans to begin investigating frog vision, in part to learn how the animals might perceive color differences at nighttime, when many species are most active.

Funding for this study was provided by the University of California and Macquarie University in Australia.