“Cyprus: Crossroads of Civilizations” Opens at the Smithsonian Sept. 29

Exhibition Features More than 200 Artifacts on View for the First Time in the United States
September 15, 2010
News Release 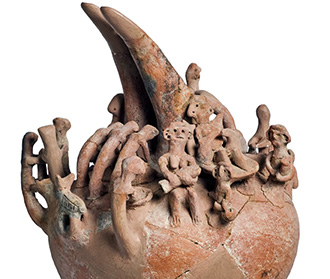 Cyprus, the eastern-most island in the Mediterranean Sea, situated at the crossroads of Europe, Asia and Africa, has been a meeting point for many of the world’s great civilizations. From its 11,000-year history, Cyprus has woven its own distinctive history and culture.

“Cyprus: Crossroads of Civilizations” will be on view at the Smithsonian’s National Museum of Natural History from Sept. 29 through May 1, 2011. The exhibition is presented on the occasion of the 50th anniversary of the independence of the Republic of Cyprus.

“‘Cyprus: Crossroads of Civilizations’ celebrates Cyprus’ 11,000-year history and showcases some of the latest discoveries from the early era of Cypriot archaeology,” said Sophocles Hadjisavvas, guest curator of the exhibition. “This unique exhibit shows the rich heritage and cultural contribution of Cyprus to the world. We look forward to having Smithsonian visitors explore Cyprus and the treasures this island has to offer.”

“This beautiful exhibition gives visitors the chance to explore the rich cultural heritage of Cyprus,” said Ellen Dorn, director of special exhibitions at the Smithsonian Institution. “The objects presented in the exhibit give visitors just a glimpse of the unique culture found on the beautiful island of Cyprus.”

The exhibition will feature more than 200 artifacts—covering nearly 11,000 years of history—that range from items from the earliest villages to masterpieces of medieval religious art and give an overview of the island’s unique culture. Among the objects on display for the first time in the United States will be:

The exhibition also will feature nearly 100 coins from different eras in Cypriot history, starting from the Hellenistic period through the Venetian period.

“Cyprus: Crossroads of Civilizations” was made possible by the Cyprus Department of Antiquities, the Cultural Foundation of the Bank of Cyprus, the Byzantine Museum of the Archbishop Makarios III Foundation, the Holy Bishopric of Morfou, the Pierides Marfin Bank Museum, the Thalassa Museum of the Municipality of Agia Napa and the National Museum of Natural History.

The Smithsonian Associates presents “Timeless Cyprus” Tuesday, Nov. 16, at 6:45 p.m. in the museum’s Baird Auditorium. This program features a lecture by Stuart Swiny, director of the Institute of Cypriot Studies at the State University of New York at Albany. Swiny draws on images of objects in the exhibition to provide an overview of the traditions that have helped to create a Cypriot identity. He also discusses some of the beliefs and cultural practices that have existed for millennia. Participants may tour the exhibition after the lecture and enjoy a reception featuring the foods and wine of Cyprus. Resident associate members: $25; general admission: $40. Call (202) 633-3030 or go to residentassociates.org.

Since its earliest settlement, Cyprus has been a gateway for the movement of ideas and goods throughout the Mediterranean. William Woys Weaver, food historian and director of the Keystone Center for the Study of Regional Foods in Devon, Pa., presents “Cyprus: Culinary Crossroads of the Mediterranean” at the National Museum of Natural History’s Baird Auditorium Wednesday, Dec. 8, from 6:45 to 9 p.m. A reception, including Cypriot wines and traditional meze,follows the lecture. Resident associate members: $35; general admission: $50. Call (202) 633-3030 or go to residentassociates.org.