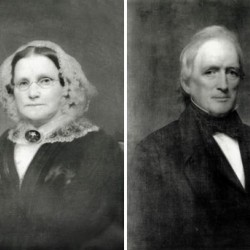 “With never-before-seen images and original research, the ‘Meet the Hewitts’ blog offers a revealing introduction to the fascinating lives and eccentric interests of the Hewitt sisters, from childhood to their later years,” said Caroline Baumann, director of the museum. “Margery and Sue capture the extraordinary legacy of Sarah and Eleanor Hewitt, collectors from an early age whose passions and activities led to the founding of the Cooper Union Museum for the Arts of Decoration, now our Cooper-Hewitt, National Design Museum.”

Segments of the blog will include:

A highlight of the blog will be the section devoted to Ringwood Manor, the Victorian summer estate of the Hewitts, where the family welcomed a long list of distinguished leaders, who are chronicled in guest books dating from 1876 to 1932. The guest books have recently been digitized, allowing for more careful study of the personalities who visited the home, including Edith Wharton, William “Buffalo Bill” Cody, Candace Wheeler and Emily Post, as well as close examination of the poems, several hundred signatures and elaborate drawings that fill the pages of these books.

An interactive timeline also accompanies the blog, which includes genealogical dates in the Cooper and Hewitt families, as well as other important civic and industry events and milestones.

As the only museum in the nation devoted exclusively to historic and contemporary design, Cooper-Hewitt educates, inspires and empowers people through design. The museum is undergoing a transformative renovation resulting in 60 percent more gallery space and will open in fall 2014 with an entirely new visitor experience. During the renovation, Cooper-Hewitt’s events and education programs are popping up locally at the Cooper-Hewitt Design Center in Harlem, nationally with the Design in the Classroom program in New Orleans, New York City, San Antonio, Washington, D.C., Cleveland and Minneapolis, and globally with exhibitions in Asia. To learn more, visit www.cooperhewitt.org.