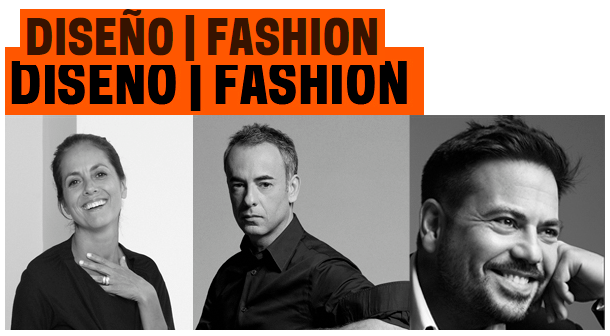 Fashion legends Maria Cornejo, Francisco Costa and Narciso Rodriguez will discuss their influences, process and inspirations at “Diseño: Fashion” Oct. 15 at El Museo del Barrio (located at 1230 Fifth Avenue at 104th Street), kicking off a new series of public programs presented by Cooper Hewitt and El Museo del Barrio celebrating Latino designers. Moderated by NBC’s Natalie Morales, admission is free and the series is open to visitors of all ages; advance registration is required at cooperhewitt.org/events.

Heralding the impact of Latinos on American design, the “Diseño” series will explore diverse fields with talks by leading figures. Programs continue in 2015 with presentations Jan. 21 and Feb. 4, featuring comic designers and interaction designers, along with hands-on workshops at Cooper Hewitt.

“Latinos have made invaluable contributions to the landscape of American design,” said Caroline Baumann, director of Cooper Hewitt. “In partnership with El Museo del Barrio, the new series ‘Diseño’ will laud their accomplishments by bringing essential Latino voices to the table and inspiring a new generation of designers through illuminating conversations. I look forward to welcoming National Design Award winners Maria Cornejo, Francisco Costa and Narcisco Rodriguez to the stage at El Museo del Barrio for the inaugural event in this important series, for what promises to be an engaging discussion of their lives and work.”

“We are delighted to host ‘Diseño’ at El Museo and showcase the considerable influence of Latino talent in the field of fashion design,” said Jorge Daniel Veneciano, El Museo del Barrio’s executive director. “As the premier Latino cultural institution in the United States, we are proud to co-host this forum for distinguished designers in partnership with Cooper Hewitt, a flagship institution of American design.”

Maria Cornejo
Born in Chile and raised in England, Cornejo’s varied career spans London, Paris, Milan and Tokyo. Her resume includes being part of the groundbreaking design partnership Richmond Cornejo, developing her own signature collection, and working as a creative consultant for major retailers like Joseph, Tehen and Jigsaw. Spare, modern, architectural, minimal, feminine and unpretentious are all words used to describe Cornejo’s work. Her collection is named ZERO as an expression of a pure vision, as she says: “ZERO is a number that neither adds nor subtracts; it is, rather, a point of departure.” In 2006 Cornejo was awarded the National Design Award for Fashion, and has been a member of the Council of Fashion Designers of America since 2003.

Francisco Costa
The recipient of the Cooper Hewitt’s 2009 National Design Award for fashion, Costa is known for his iconic and minimal, yet sophisticated, designs. Currently the creative director of womenswear for Calvin Klein Collection, Costa was first exposed to fashion through his parents’ childrenswear apparel business while growing up in the Brazilian town of Guarani. He arrived in New York City in the early 1990s; while studying English, he enrolled at F.I.T. where his talent quickly earned him an Idea Como/Young Designers of America award. He has designed for Bill Blass, Oscar de la Renta and Gucci before joining Calvin Klein in 2003. Costa’s work has received critical acclaim and numerous awards. In 2006 and 2008, the CFDA named Costa the Womenswear Designer of the Year. In 2008, he was given the Mortimer C. Ritter Award by the F.I.T. Alumni Association for excellence in art and design. In 2009, he was honored by Parsons The New School for Design at the school's annual fashion benefit.

Narciso Rodriguez
The recipient of the 2014 Cooper Hewitt National Design Award for fashion, Rodriguez has redefined American style over the past two decades, playing a singular role in global fashion through his structured and elegantly minimal designs. Rodriguez incorporates a simple, sophisticated sensibility—he makes modern classic clothing that functions both practically and aesthetically. He has received numerous accolades, including three CFDA Awards and Pratt Institute’s Fashion Icon Award, and was named one of the “25 Most Influential Hispanics in America” by Time magazine. Rodriguez has collaborated with artists and on several films, and most recently designed costumes for the Stephen Petronio Company’s 30th-anniversary season.

Natalie Morales
Morales is the news anchor of NBC News’ TODAY and the co-host of the third hour, a position she has held since March 2006. Before her current role, Morales served as TODAY ’s national correspondent from February 2006 to June 2011. Before joining TODAY, Morales was an anchor and correspondent at msnbc. While working for NBC News, Morales has reported on and contributed to several major breaking news stories across the globe, and she has interviewed countless notable newsmakers, dignitaries and celebrities. In addition, the 15th-anniversary edition of Latina magazine named Morales one of the “15 Latinas We Love” on its October 2011 cover; Hispanic magazine named her one of the “Top Hispanics to Watch” in 2005 and one of the “Top Trendsetters” of 2003. Morales began her on-air career at News 12 - The Bronx, where she also shot, produced and edited her own reports. She holds a Bachelor of Arts degree from Rutgers University, New Jersey, with dual majors in journalism and Latin American studies.

This program received federal support from the Latino Initiatives Pool, administered by the Smithsonian Latino Center.

Founded in 1897, Cooper Hewitt is the only museum in the nation devoted exclusively to historic and contemporary design. The museum educates, inspires and empowers people through design, presenting compelling educational programs, exhibitions and publications. International in scope and possessing one of the most diverse and comprehensive collections of design works in existence, the museum’s rich holdings range from Egypt’s Late Period/New Kingdom (1100 B.C.) to the present day and total more than 200,000 objects.

Cooper Hewitt is located at 2 East 91st Street at Fifth Avenue in New York City. Hours are Sunday through Friday, 10 a.m. to 6 p.m. Saturday, 10 a.m. to 9 p.m. The cafe and garden open two hours before the museum. The museum is closed on Thanksgiving Day, Christmas Day and New Year’s Day. Public transit routes include the Lexington Avenue 4, 5 and 6 subways (86th or 96th Street stations) and the Fifth and Madison Avenue buses. General admission, $18; senior citizens and college students, $12. Cooper Hewitt members and children younger than age 18 are admitted free. Pay What You Wish, every Saturday, 6 to 9 p.m. The museum is fully accessible.