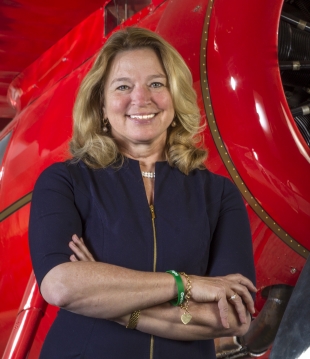 Ellen Stofan is the Under Secretary for Science and Research at the Smithsonian. She oversees its science research centers as well as the National Museum of Natural History and the National Zoo. The Smithsonian Libraries and Archives, Office of International Relations, Smithsonian Scholarly Press and Scientific Diving Program also report to Stofan. Her focus is the Smithsonian’s collective scientific initiatives and commitment to research across the Institution, especially addressing issues such as biodiversity, global health, climate change, species conservation, astrophysics and the search for life outside Earth’s solar system.

Previously, Stofan was the John and Adrienne Mars Director of the Smithsonian’s National Air and Space Museum (2018–2021) where she was the first woman to hold that position. Under her leadership, the museum began its seven-year renovation of its flagship building in Washington, D.C., in 2018. Stofan also oversaw the momentous celebration of the 50th anniversary of the first moon landing in July 2019 at the museum and on the National Mall.

Before joining the Smithsonian, Stofan had than 25 years’ experience in space-related organizations and a deep research background in planetary geology. She was chief scientist at NASA (2013–2016), serving as the principal advisor to former Administrator Charles Bolden on NASA’s strategic planning and programs. She helped guide the development of a long-range plan to get humans to Mars, and worked on strategies for NASA to support commercial activity in low Earth orbit as it transitions from the International Space Station to sending humans to the moon and Mars in the mid-2020s.

She earned her bachelor’s degree in geology at the College of William & Mary in Williamsburg, Virginia, and her master’s and doctoral degrees at Brown University, both in geological sciences. While finishing her doctoral degree, Stofan joined the Jet Propulsion Lab (JPL) as a post-doctoral fellow and became the deputy project scientist for the Magellan Mission to Venus.

In 1994, Stofan became JPL’s chief scientist for the New Millennium Program where she managed a team of about 100 scientists working on new technologies. The following year, Stofan moved to London while continuing to work at JPL and was, and continues to be, an honorary professor at University College London.

For 13 years (2000–2013), Stofan was vice president and senior scientist at Proxemy Research, a consulting firm in the Washington area specializing in planetary research.

Stofan’s research focuses on the geology of Venus, Mars, Saturn’s moon Titan and Earth. Her favorite mission was Cassini, primarily because of her interest in Titan.

She has published extensively and received many awards and honors, including the Presidential Early Career Award for Scientists and Engineers and the NASA Distinguished Service Medal, and was named one of “CNN’s Extraordinary People of 2014.” She is co-author of the books Planetology: Unlocking the Secrets of the Solar System and Next Earth: What Our World Can Teach Us About Other Planets, both published by National Geographic.