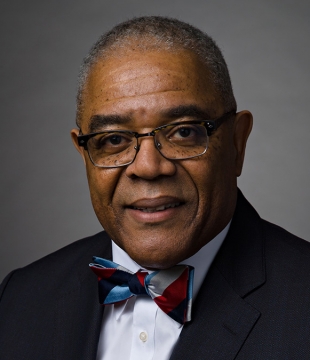 Vernon Simms is the director of the Smithsonian’s Office of Government Relations. He is responsible for promoting and strengthening the Smithsonian’s relationship with Congress, the executive branch and federal, state and local governments.

For more than 20 years, Simms served as chief of staff for the late U.S. Rep. Elijah E. Cummings where he led a staff of 21 in Washington, D.C., and in the district offices to deliver constituent services. He provided legislative support to Cummings and strategic support of his leadership as chairman of the Committee on Oversight and Reform as well as his leadership in the Congressional Black Caucus. Simms also performed other leadership roles during his 23 years in public service.

Simms provided advice and strategic direction to Cummings on a variety of political and legislative issues, and he was a conflict-resolution liaison for the Committee on Oversight and Reform where Cummings was chairman.

Simms served as the point of contact and liaison for the Maryland Congressional Delegation, Maryland State Delegation, and the Baltimore City, Baltimore County and Howard County Delegations.

Before joining Cummings’ staff, Vernon was the special assistant for government and community operations for U.S. Rep. Kweisi Mfume.

Simms was responsible for assisting Mfume with government and community issues. He worked with the administrative assistant and district director to determine the impact of various issues and the response to constituents, the director of communications to direct target mailings and other communications, met and negotiated with various politicians and political groups on behalf of the Congressman and acted as an ombudsman for the congressman.

Early in his career, Simms was a paralegal with the law firm Singleton, Dashiell and Robinson, attorneys in Baltimore, and he was the executive director of the Maryland Chapter of the American Planning Association in Baltimore.