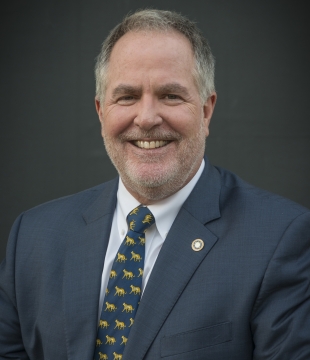 Credit: Smithsonian Institution
Under Secretary for Science and Research

Monfort is responsible for managing the organization's multimillion dollar budget; the Zoo, a public facility that welcomes approximately 1.8 million visitors each year; and the Smithsonian Conservation Biology Institute (SCBI), which includes groundbreaking work in conservation biology. Monfort is also responsible for education programs, ticketed events and retail services implemented by Friends of the National Zoo (the Zoo’s nonprofit partner and membership organization).

Monfort has been affiliated with the Zoo since 1986, when he founded the Zoo’s Endocrine Research Laboratory. It is the largest laboratory of its kind in the United States, dedicated to monitoring hormones for assessing reproductive health and well-being in diverse wildlife species.

Monfort has also served as a scientific advisor to the Smithsonian’s Under Secretary for Science and was previously the supervisor of SCBI's Education Office and an associate clinical veterinarian.

Since 2006, he has been the Zoo’s associate director for conservation and science, supervising approximately 100 research scientists, research veterinarians, technicians, support staff, postdoctoral fellows, graduate students and research interns located at the Zoo’s Rock Creek and Front Royal facilities. In addition to serving as the leader of the Zoo’s science directorate, Monfort was the John and Adrienne Mars Director, Smithsonian Conservation Biology Institute.

Monfort is co-founder of the Smithsonian-Mason School of Conservation, an in-residence program at SCBI that immerses George Mason University students in an interdisciplinary, conservation learning environment. He is an affiliate professor at George Mason, founder of the Sahelo-Saharan Interest Group, chair of the Asian Wild Horse Species Survival Plan, co-founder and board chair emeritus of the Sahara Conservation Fund and serves as a member of the International Union for Conservation of Nature and Natural Resources antelope, cervid and conservation breeding specialists groups.

Monfort has published more than 100 peer-reviewed scientific papers in the broad discipline of reproductive biology, and he helped to pioneer noninvasive endocrine monitoring techniques that are now widely used for assessing reproductive status and well-being of wildlife species in zoos and in nature. Monfort received his doctor of veterinary medicine degree from the University of California at Davis and his doctorate in environmental biology and public policy at George Mason University.