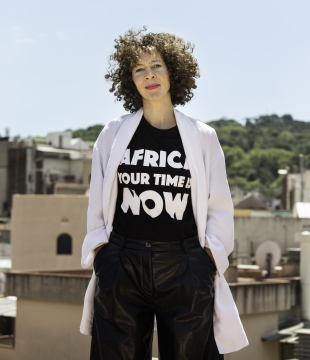 Ngaire Blankenberg is the director of the Smithsonian’s National Museum of African Art, the nation’s premiere museum devoted to the arts of Africa. Founded as a small museum on Capitol Hill in 1964, the museum became a part of the Smithsonian in 1979 and, in 1987, it moved to its current location on the National Mall. The museum’s collection of more than 12,000 objects represents nearly every area of the continent of Africa and contains a variety of media and art forms.

Previously, Blankenberg was a consultant for museums and cultural destinations around the world, finding innovative ways to connect cultural resources to new audiences and -reimagining the museums of the future.

She has advised clients on concept development, operations and business planning, programming, stakeholder and public engagement and more. Her recent consulting clients include the National Gallery of Canada, Superblue, Museum and Archive of the Constitution at the Hill (Johannesburg), the Canadian Museum for Human Rights, MEG—Musée d’ethnographie de Genève, Olympique de Marseille football club and other global and local institutions.

In 2017, Blankenberg served as the head of content and strategy for Kossmanndejong, an Amsterdam-based design agency where she helped museum clients shape their interpretive approach to exhibitions, strategic planning, new business development and content development. Previously, she spent eight years (2008–2016) at Lord Cultural Resources as a principal consultant. From 2015 to 2016, she served as the director of Lord Cultural Resources in Europe.

In addition to her extensive work consulting for museums and cultural heritage sites, Blankenberg is an award-winning TV and documentary producer and director, public speaker and a published author.

Blankenberg holds a Master of Arts in media and cultural studies from the University of Natal, in Durban, South Africa, and a bachelor’s degree in journalism from Carleton University in Ottawa, Ontario, Canada.