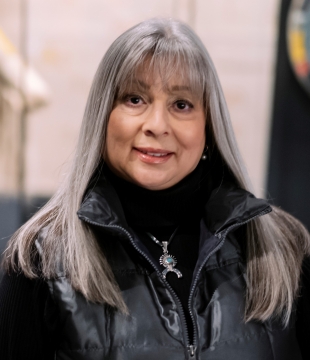 Photo by Matailong Du for the National Museum of the American Indian.
Under Secretary for Museums and Culture

Machel Monenerkit is the acting director of the Smithsonian’s National Museum of the American Indian.

Before becoming acting director, she served as the museum’s deputy director. In this role, she provides administrative and programmatic direction for the museum’s three facilities: the museums in Washington, D.C., and New York City, and the Cultural Resources Center in Suitland, Maryland. She oversees several museum departments, including administration, advancement, executive and financial planning, and institutional partnerships. She has overseen building and implementing a five-year strategic and tactical plan, a rebrand of the museum and significant administrative measures to improve museum operations. The museum has raised more than $58 million since its advancement department was added to her portfolio.

In 1994, Monenerkit joined the museum as a volunteer and then became a program manager in public programs at the museum in New York. There she gained extensive experience in programming, exhibition planning, project management and administration. In 1998, she transferred to the museum’s location in Washington, where she oversaw three major projects for the 2004 opening. She joined the museum’s executive office in 2006.

Under Monenerkit’s leadership, the museum expanded “Native Cinema Showcase,” its annual celebration of the best in Native film. The event celebrated its 20th anniversary in 2020. Also under her leadership the museum presented “The REDress Project” by Métis artist Jaime Black in 2019. This outdoor art installation of empty red dresses called attention to the issue of missing or murdered Indigenous women.

Monenerkit managed the museum’s international competition for an outdoor sculpture for its grounds, which Nora Naranjo Morse (Santa Clara Pueblo) won with her work “Always Becoming” (2007). “Always Becoming” was the first outdoor sculpture in the nation’s capital created by a Native American woman. She served as project manager for Rick Bartow’s (Wiyot) “We Were Always Here” (2008), a pair of cedar carvings at the northwest corner of the Washington museum; David Boxely’s (Tsimshian) “The Eagle and the Chief” (2011), a totem on view in the museum’s Potomac Atrium; and “Fritz Scholder: Indian/Not Indian” (2008), a major retrospective of more than 130 works on view at the Washington and New York museums.

Monenerkit has co-chaired the Smithsonian’s American Indian Employee Network since 2002 and was a member of the American Alliance of Museum’s Working Group on Diversity, Equity, Accessibility and Inclusion, which produced the 2018 report “Facing Change.”