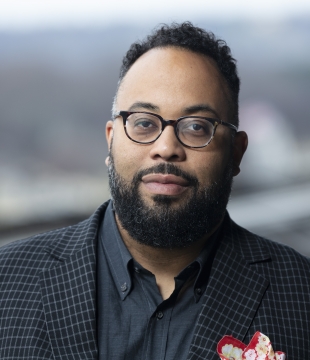 Image by Leah L. Jones, National Museum of African American History and Culture
Under Secretary for Museums and Culture

Kevin Young is the Andrew W. Mellon Director of the Smithsonian’s National Museum of African American History and Culture.

Young is best known as a poet, author, essayist and editor. He has written 11 books of poetry, two works of nonfiction and is the editor of 10 other works, including African American Poetry: 250 Years of Struggle and Song published in October 2020. In 2016, he became the director of the Schomburg Center for Research in Black Culture, a research division of the New York Public Library, and he is also currently the poetry editor at The New Yorker magazine. Founded in 1925 and named a national historic landmark, the Schomburg Center is a focal point of Harlem’s cultural life with extensive collections of art and artifacts, reference works, rare books and archives, photography and recordings.

During his four-year tenure as director of the Schomburg Center, Young secured several high-profile acquisitions, including the Harlem-based archives of Harry Belafonte, James Baldwin, Ossie Davis and Ruby Dee, Sonny Rollins and Fred “Fab 5 Freddy” Brathwaite and the manuscript of The Autobiography of Malcolm X, including a once-lost chapter. In addition to raising $10 million in grants and donations and raising attendance by 40 percent, Young enhanced the entire profile of the Schomburg Center, developing the “Home to Harlem” initiative, the new Schomburg Center Literary Festival and continuing the popular Black Comic Book Festival. Recently, while closed for the pandemic, the Schomburg Center developed a Black Liberation Reading List with 95 books and affiliated programs.

Before joining the Schomburg Center, Young was the Charles Howard Candler Professor of Creative Writing and English at Emory University in Atlanta where he taught for 11 years. He also was the curator of Emory’s Raymond Danowski Poetry Library, a 75,000-volume collection of rare and modern poetry, and curator of literary collections. He has produced a wide range of poetry and cultural criticism, including two non-fiction books, Bunk: The Rise of Hoaxes, Humbug, Plagiarists, Phonies, Post-Facts and Fake News (Graywolf Press, 2017), longlisted for the National Book Award, and The Grey Album: On the Blackness of Blackness (Graywolf Press, 2012), which won the PEN Open Book Award and was named a New York Times Notable Book.

The National Museum of African American History and Culture opened Sept. 24, 2016. Located next to the Washington Monument, the 400,000-square-foot museum is the nation’s largest and most comprehensive cultural center devoted exclusively to exploring, documenting and showcasing the African American experience. The museum has a collection of more than 37,000 objects, with about 3,000 on display. Highlights include artifacts belonging to Harriet Tubman, including her shawl and hymnal, Emmett Till’s casket, a slave cabin from Edisto Island and a Jim Crow-era railroad car. The museum has more than 10,000 digitized objects and collection stories online.

While closed for the COVID-19 pandemic, the museum continued to publish online educational content, including the “Talking About Race” website, online Juneteenth program, virtual Community Day and March on Washington digital resources.

Young earned his bachelor’s degree from Harvard College in 1992, held a Stegner Fellowship in Poetry at Stanford University (1992–1994) and received his Master of Fine Arts degree in creative writing from Brown University in 1996. A former Guggenheim Fellow, he was elected to the American Academy of Arts and Sciences in 2016 and was named a Chancellor of the Academy of American Poets.

Young succeeds the founding director, Lonnie G. Bunch III, who is now the Secretary of the Smithsonian.