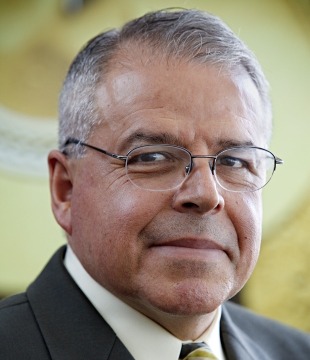 The National Museum of the American Latino was established by Congress in late December 2020. Díaz, a veteran arts administrator and director of the Smithsonian’s Latino Center since 2008, will serve in both roles until a founding director of the new museum is named.

The Latino Center works to increase and enhance Latino presence at the Smithsonian Institution by supporting, developing and promoting exhibitions, collections, archives, research, public and educational programs, and web content that focus on the Latino experience. Díaz is an advisor to the Smithsonian’s Secretary and Under Secretary for Museums and Culture as well as to Congress and other government agencies on a range of cultural development issues related to Latino communities in the United States.

Díaz is responsible for the management and delivery of exhibitions, public and educational programs and the Latino Center’s Latino Virtual Museum. During his tenure, he has spearheaded several projects, including the exhibitions “Our America: The Latino Presence in American Art” and “Cerámica de los Ancestros: Central America’s Past Revealed.” Scheduled to open in 2022, the Molina Family Latino Gallery at the Smithsonian’s National Museum of American History will be the first physical presence and gallery for the center. Current research initiatives include the Caribbean Indigenous Legacies Project and the Latino D.C. History Project.

Previously, Díaz was the executive director of the National Hispanic Cultural Center in Albuquerque, New Mexico. He oversaw the operations of a 16-acre campus that offered year-round programming in the visual, performing and literary arts as well and youth and family activities. . In 2001, he co-founded the International Accordion Festival, a free outdoor music celebration, in San Antonio.

From 1981 to 1999, Díaz served as the director of Cultural Affairs for the City of San Antonio. He is currently a member of the National Association of Latino Arts and Culture.

Díaz earned a law degree in 1976 from the University of California at Davis, and a bachelor’s degree in 1972 in Latin American Studies at San Diego State University. He is fluent in Spanish and Portuguese.